The Charlotte Hornets play host to the Los Angeles Lakers at the Spectrum Center on Tuesday night.

The Los Angeles Lakers have been in decent shape as they’ve won five of their last nine games, but they will be looking to bounce back in this one after getting routed by the Knicks in a 111-96 road loss last night. Dennis Schroder led the team with 21 points and six assists, Markieff Morris added 17 points with four assists while Kyle Kuzma chipped in with 14 points. As a team, the Lakers shot 43 percent from the field and 12 of 36 from the 3-point line as they fought hard to hang in the contest in the first half, before getting blown out in the third quarter where they managed just 16 points. Kentavious Caldwell-Pope scored just 12 points and no bench player scored more than 10 points.

Meanwhile, the Charlotte Hornets have been in great shape as they’ve won seven of their past 11 games and they will be hoping to bounce back after getting stopped by the Hawks in a 105-101 home loss on Sunday. Miles Bridges led the team with 23 points on nine of 17 shooting, Terry Rozier added 18 points while Devonte Graham chipped in with 16 points. As a team, the Hornets shot 46 percent from the field and 15 of 43 from the 3-point line as they rallied back from an early 18-point deficit to take the lead late in the fourth quarter, only to go scoreless in the final 2:13 to fall just short.

The Lakers have been able to keep their heads above water without their two best players in LeBron James and Anthony Davis, but their confidence took a hit in last night’s big loss to the Knicks. The Hornets were on a nice roll with seven wins in 10 games before falling just short to the Hawks on Sunday, but they should be getting PJ Washington back in this one which is a nice boost. The Hornets are 4-1 ATS in their last five home games and the Lakers are playing this one on zero days’ rest, so I’m taking the Hornets to get the win and cover in this one. 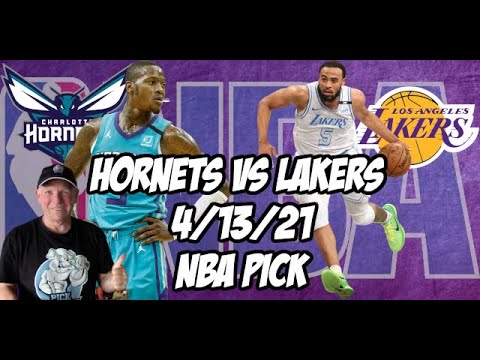