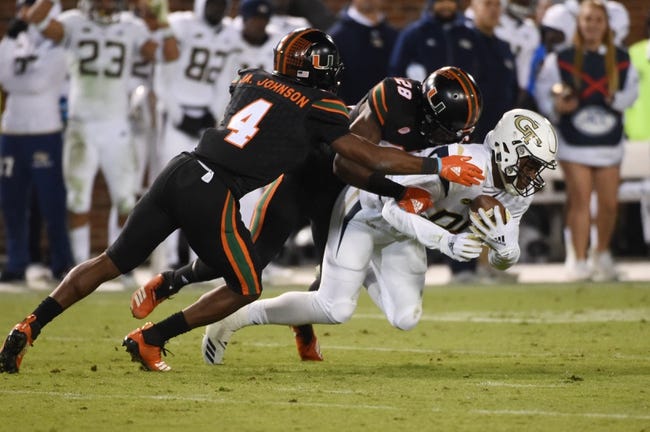 The Georgia Tech Yellow Jackets will head to Florida to face the Miami Hurricanes in this Week 10 college football matchup. Miami is sitting at .500 through their first eight while Georgia is 3-5.

Miami is led by QB Tyler Van Dyke, who is in for the injured D'Eriq King. In ACC games, Van Dyke ranks fourth in the league, averaging 304.5 passing yards. Van Dyke led Miami to two wins as underdogs. In those two games, Van Dyke completed 57 of 75 passes for 751 yards and 7 touchdowns with just a single interception. Miami should feel great about these two wins against ranked opponents as Miami will not play a ranked team for the remainder of the 2021 season.

The Hurricanes are 5-2 ATS in their last 7 conference games and 4-1 ATS in their last 5 games overall. However, Miami has not defeated Georgia Tech since 2017, and will be looking to break the Yellow Jacket’s two game win streak in the matchup.

Georgia Tech Jeff Sims is more dangerous on the ground than he is through the air. As he has rushed for 10 Touchdowns in his 16 game career. He hasn’t been as precise of a passer with 19 interceptions on a 57% completion rate. Georgia Tech is 0-4 ATS in their last 4. Nonetheless, four of their five losses this year have all been by nine points or less. This likely explains why this line has dropped to 9.

The Hurricanes are 4-1 ATS in their last 5 games overall and majority of these wins have been as an underdog. This is a game in which Miami is a favorite and I think this is a big let down spot for them. I think they win, but Georgia Tech will come out to play after losing a game in which they were 3 point favorites last time out.