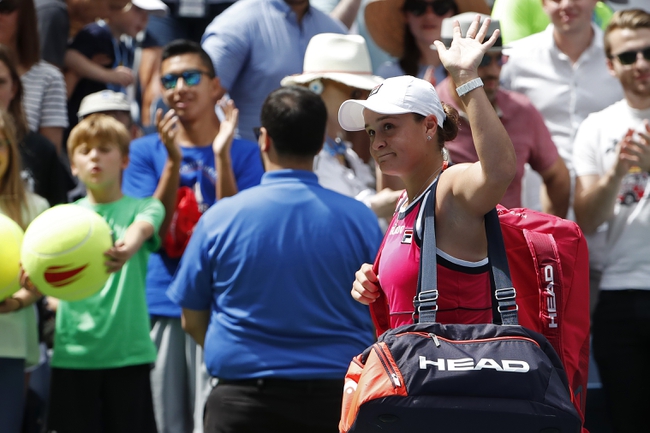 Ashleigh Barty and Sofia Kenin meet in the semifinals of the 2020 tennis Australian Open.

Ashleigh Barty is coming off a straight sets win over Petra Kvitova that took 21 games to decide. In the victory, Barty won 74 percent of her first serve points and 35 percent of her second serve points. Barty won 60 percent of her total service points and converted on four of her eight break points. Barty got 63 percent of her first serves in play, saved 10 of 12 break points and hit 20 winners. Barty can still clean up the unforced errors to make matches a lot easier, but she’s playing to the crowd and seems to be gaining confidence. Barty looks to make her second career grand slam final appearance and the first at the Australian Open. Barty has won nine straight matches on hard court.

Sofia Kenin is coming off a straight sets win over Ons Jabeur that took 20 games to decide. In the victory, Kenin won 64 percent of her first serve points and 55 percent of her second serve points. Kenin won 62 percent of her total service points and converted on three of her nine break points. Kenin got 72 percent of her first serves in play, saved six of seven break points and had just 16 unforced errors. Kenin has won 12 of her last 15 sets and continues to play disciplined, clean tennis. Kenin has seven career wins over top-10 players, and five of those wins came last year. Kenin looks to make her first career grand slam final appearance and her fifth final appearance overall. Kenin has won six of her last seven matches on hard court.

Barty has won four of the five meetings against Kenin, including the most recent match in 2019 Wuhan. Three of her four wins have been decided in straight sets. Kenin’s only win over Barty came in 2019 Toronto.

Kenin has the feistiness to win this match and has the potential to hit through Barty and control the pace of the match. The problem is Barty has a massive experience edge, has owned the h2h with wins in four of the five matches and has the whole stadium behind her to provide that extra boost when needed. It’s tough to bet against Barty in this spot.

Look for Barty to make the final of her home slam for the first time.