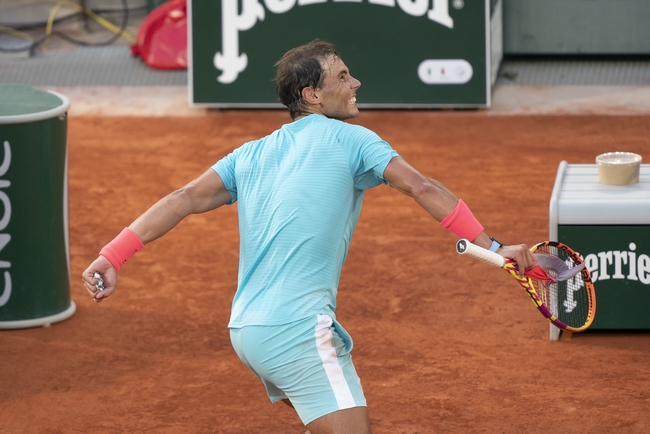 Novak Djokovic and Rafael Nadal meet in the final of the 2020 tennis French Open.

Novak Djokovic is coming off a five sets win over Stefanos Tsitsipas that took 56 games to decide. In the victory, Djokovic won 73 percent of his first serve points and 47 percent of his second serve points. Djokovic won 64 percent of his total service points and converted on eight of his 22 break points. Djokovic got 67 percent of his first serves in play and saved 11 of his 15 break points. Djokovic cruised in the first two sets and then allowed things to get away from him, forcing him to play five sets and nearly four hours. It’s going to be interesting to see how Djokovic recovers from possible fatigue. Djokovic hopes to win his second French Open title and his 18th grand slam title overall. Djokovic is 1-3 in final appearances at the French Open, but he’s won each of his last five grand slam final appearances overall. Djokovic has won 15 straight matches on clay court.

Rafael Nadal is coming off a straight sets win over Diego Schwartzman that took 31 games to decide. In the victory, Nadal won 68 percent of his first serve points and 53 percent of his second serve points. Nadal won 63 percent of his total service points and converted on six of his nine break points. Nadal got 69 percent of his first serves in play and saved nine of his 12 break points. Nadal still has yet to drop a set this tournament and he’s won his two tiebreaks by a combined score of 14-4. Nadal hopes to win his 13th French Open title and his 20th grand slam title overall. Nadal is 13-0 in French Open final appearances and has won nine of his last 12 grand slam final appearances overall. Nadal has won eight of his last nine matches on clay court.

Djokovic didn’t do himself any favors by having to play extra tennis to get this point, as he’s going to do a ton of running to have a chance in this one. Either way, Nadal has to be the pick here, as this is his tournament, winning the title 13 times and not losing a single final appearance. Also, Nadal has been the sharper, better player, not even dropping a set up to this point. We don’t get Djokovic as an underdog often, so I can see the case there, but that’s about the only edge you have there.