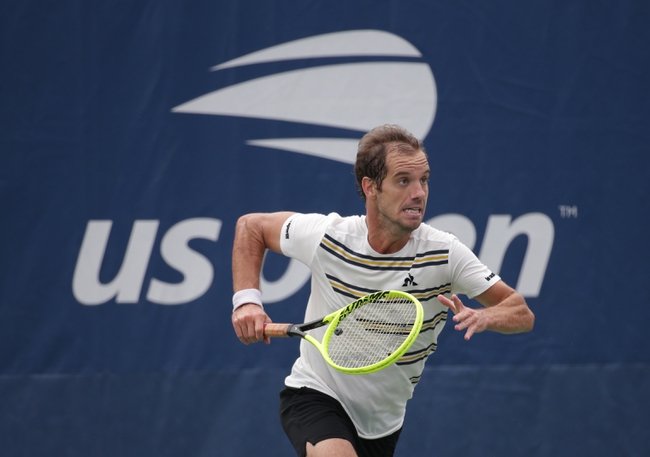 The night session of Day 6 at the Ultimate Tennis Showdown is here! We have the battle of the Frenchmen as Richard Gasquet meets Corentin Moutet, and we also have the Wall against the Artist as David Goffin meets Dustin Brown. Who will prevail on Sunday night?

Richard Gasquet has been superb here at the Ultimate Tennis Showdown, going 3-1 in his matches and showing us all why he should not be underestimated. Gasquet had a terrible 2019 season and has only recently come back 100% after injury issues. Gasquet is one of the best in the game when he is at full health and it has been great to see him being 100% here at the Ultimate Tennis Showdown. Gasquet meets the young up-and-comer in Corentin Moutet. Moutet is a very determined young Frenchman who is trying to make a name for himself. Moutet is extremely passionate and always gives it his all. Moutet has gone 1-1 at the Ultimate Tennis Showdown and he will not want to stop playing the way he has. Moutet will be looking to cause an upset, but he is not of the same caliber as the more experienced Frenchman, Richard Gasquet. Gasquet's one-handed backhand and superb movement will allow him to make easy work of this match.

Dustin Brown has been quite disappointing here at the Ultimate Tennis Showdown, losing all of his matches. Brown used to be such a solid player who could both entertain and win matches in big moments. However, nowadays he can only seem to entertain. Brown will be meeting David Goffin who is in exceptional form after having adapted his game to the Ultimate Tennis Showdown last weekend. Brown has beaten Goffin 3-0 in their career encounters, however, all of those matches were in 2009 when Goffin had just come onto the ATP Tour. Goffin is the much better player nowadays and he will definitely make easy work of the older German. It would be a miracle if Brown is able to get more than 1 quarter in this match.

Get Premium Picks Start Winning Now »
The pick in this article is the opinion of the writer, not a PickDawgz site consensus.
Previous Pick
Ultimate Tennis Showdown - Day 5 - Day Session -Tennis Picks, Odds, and Predictions
Next Pick
Andy Murray vs. Felix Auger-Aliassime - 9/3/20 US Open Tennis Picks and Prediction