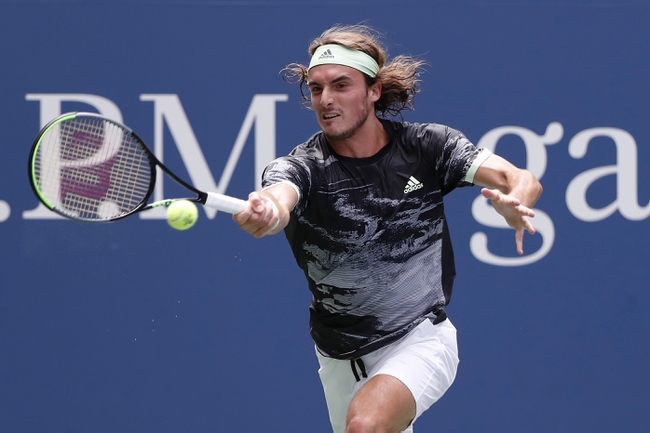 Day 5 of the Ultimate Tennis Showdown is here and we have some extremely fun matches to watch in the day session! David Goffin meets Dominic Thiem, Benoit Paire meets Alexei Popyrin, and Feliciano Lopez meets Stefanos Tsitsipas. Who will come out on top on Saturday?

If you look at the head to head between these two players, it would be an easy choice to choose David Goffin as the winner of this match. However, you have to look more closely. David Goffin has not played Dominic Thiem in 3 years, and since then Thiem has become one of the toughest players in the game. Thiem will move Goffin off the court as Richard Gasquet did on the first weekend here at the Ultimate Tennis Showdown. Dominic Thiem has a lot of momentum after defeating Stefanos Tsitsipas last Sunday, and I don't see him losing to Goffin.

Benoit Paire is of course a much more experienced and talented player, however, he does not focus in his matches and has a terrible attitude. Paire just gives up in matches recently and I see Alexei Popyrin, who is extremely determined to make a massive name for himself, to take control of this match and show us how tough he is. If Popyrin takes control early, expect Benoit Paire to just give up.

This is probably going to be my favorite match of the day session, as the young star, Stefanos Tsitsipas, meets the veteran, Feliciano Lopez. Lopez still plays incredible and beautiful tennis at the age of 38 and he will want to show us that age is just a number. On the other hand, we have a player who had one of the best individual seasons in tennis history in 2019. Tsitsipas is the future of tennis, and he is going to be a Grand Slam champion very soon in my opinion. This match will be a thing of beauty, but Tsitsipas will want to win it more. Tsitsipas is the better player, and he will want to bounce back after losing to Thiem last Sunday.