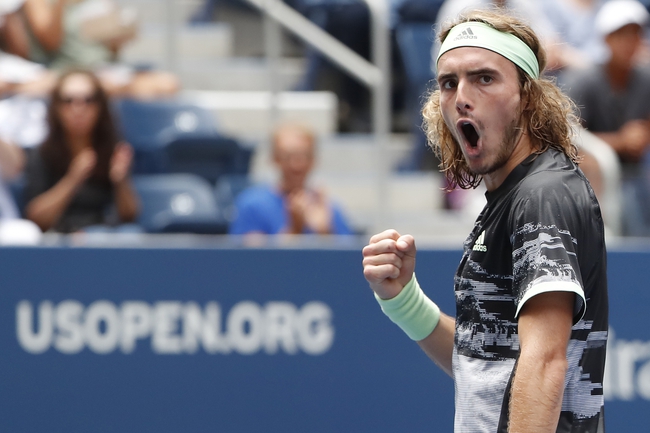 Where to watch: EUROSPORT Stream live sports and exclusive originals on ESPN+. Sign up now!

The night session of Day 3 of the Ultimate Tennis Showdown is bringing some exciting matches for you to watch! We have Stefanos Tsitsipas meeting Dustin Brown and Alexei Popyrin meets David Goffin. These matches will be very fun to watch, but who will come out victorious? Here are our predictions for the night session of the Ultimate Tennis Showdown Day 3:

This is going to be such a fun encounter. We have seen clips of these two training together on the Ultimate Tennis Showdown Instagram, and if those are anything to go by, we will see some fun points and some extremely close rallies. Dustin Brown can entertain and he knows how to pull off incredible winners, and on the other hand, Tsitsipas just looks unstoppable. Brown, unfortunately, is not as good as he used to be and Tsitsipas just keeps on getting better. This is going to be a fun match, with both players enjoying themselves, but at the end of the day, Stefanos Tsitsipas will come out victorious.

Alexei Popyrin has been superb in his first two matches here at the Ultimate Tennis Showdown, going 2-0. Popyrin is here to prove to everyone that he is going to be one of the main young players on the tour and that you should not underestimate him. Popyrin is tall, has a big serve and he is lightning fast in his movement. Alexei Popyrin will want to maintain this momentum as he meets a much more experienced player in David Goffin. David Goffin did not have the start to the Ultimate Tennis Showdown that he would have desired. Goffin went 0-2 last weekend, losing a tight match against Richard Gasquet and then being absolutely destroyed by Matteo Berrettini in his next match. Goffin can beat anyone when he is on top of his game, however, he has not adapted his playing style to this tournament as he should have. Goffin needs this victory bad, and for that reason, I think he will come out and give it his all. Alexei Popyrin does not have as much motivation to win this one and therefore can afford to slack off.