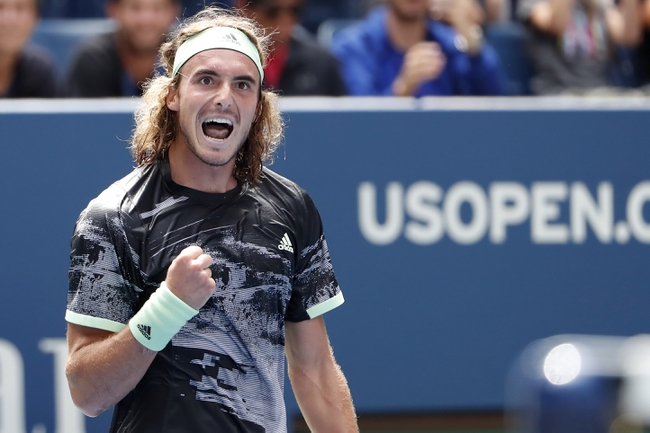 Day 2 is now the actual start of the Ultimate Tennis Showdown, as Day 1 had to be postponed due to the bad weather at the Mouratoglou Tennis Academy in Sophia Antipolis, France. Day 2 provides us with some great and exciting matches, all of which are going to be more exciting than the prior. Who will claim their first victory in the Ultimate Tennis Showdown? Here are our picks for Day 2:

The battle of the youngsters, as Benchetrit meets Popyrin in what will be a very exciting matchup. Neither player has anything to lose and they will both give it their all. The match will be the first match of the day and I am sure that it will be a tight one. However, one player has more experience than the other. That is Alexei Popyrin. Popyrin has more main tour experience and this is a big advantage for him. I believe that Popyrin is the better player and he has more potential. With that being said, take Popyrin.

What an amazing second match of the day. We have the legend which is Dustin Brown, coming up against the young Italian star, Matteo Berrettini. Both players are incredibly strong, and Brown is one of the best shotmakers in tennis history. If this was both players in their prime, it would be an easy choice on who is to win. However, Brown is no longer the player he used to be. Brown can still pull off some incredible shots and win some fun rallies, but when it comes to consistency, you have to back the young Italian.

One of the more underrated matches on the card in my opinion, and a match which is going to prove everyone wrong. Both players here want to prove that they are still on top of their game, and with Feliciano Lopez' incredible 2019 season, he is motivated to have another great year. Lucas Pouille is also looking for a redemption season after a tough year in 2019. This match will be tight, but I think that the Spaniard is just in better form at the moment.

Two amazing players in Richard Gasquet and David Goffin meet in what will be one of the best matches of the day. Richard Gasquet has had injury issues other the last year and spent most of the 2019 season trying to get back into top form. On the other hand, David Goffin had an amazing 2019 season and started out the 2020 season with an amazing victory over Rafael Nadal at the ATP Cup. These two players, if on top of their game, are hard to distinguish and pick from. However, due to Gasquet's injury issues and lack of consistency in recent months, I have to side with Goffin.

This match is going to be an extremely hard-fought battle with both players being extremely passionate and worthy of winning. Benoit Paire is one of the best players on the tour in his ability to create shots out of nothing, and because of his flamboyant playing style. On the other hand, we have the most promising young player in Stefanos Tsitsipas who has already made a name for himself by beating all of the Big 3 multiple times last year. Both players could win this, but Tsitsipas is the much better player, so I'm siding with him