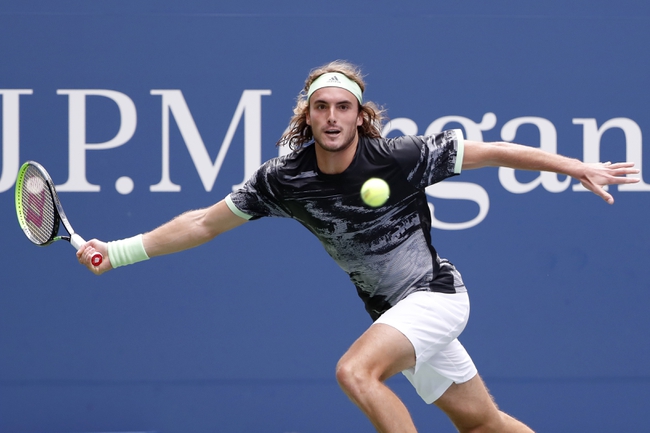 Day 1 of the Ultimate Tennis Showdown is here! We have some exciting matchups to watch and I am sure they will not disappoint. Many top 10 players such as Stefanos Tsitsipas, David Goffin, Matteo Berrettini, and Dominic Thiem (next weekend) will play and finally, tennis is back! Here are our predictions for the first day:

This is the battle of the one-handed backhands and it will be very interesting to watch. Gasquet has all the promise and potential in the world 5 years ago, but injury problems and recovery issues have made it hard for the Frenchman to get his career back on track. On the other hand, Tsitsipas has been out of this world over the last year and a half. These two players will create some magic on the court, but at the end of the day, Tsitsipas is in much better form and has beaten tougher opponents in the past.

This is going to be a powerful clash. Matteo Berrettini, who has such an incredibly strong forehand, will come up against the experienced David Goffin. Goffin is one of the best returners in the game, and this year he has already beaten the likes of Rafael Nadal. Berrettini has an incredible 2019 season but has failed to find momentum in the early stages of 2020. This will be a tight one to call, but Goffin should edge it.

This is one of the less exciting matchups of the first day, however, it does not mean it won't provide some amazing tennis. Pouille is looking for a redemption season after having a less than goof 2019 season. Pouille has all the traits of a great player, he just needs to focus on continuously improving his game. Elliot Benchetrit is more of a challenger level player and unfortunately for him, he does not have the experience or the ability to compete with the main tour guys.

The oldest player on the ATP Tour meets one of the youngest. Feliciano Lopez will face Alexei Popyrin in what is going to be my personal favorite match of the day. Popyrin is an exciting young prospect and he will become one of the best in the game. Popyrin is flamboyant in his playing style and he has a lot of potential. Feliciano Lopez on the other hand is towards the back end of his career, however, he is still competing at his best. Lopez had an amazing 2019 season and he showed us all that he is still here to compete. Experience or youth? I will have to go with experience.

This is going to be an amazing match, as two players who have incredible shots in their arsenal, will try to outplay each other. Dustin Brown and Benoit Paire are both incredible tricksters on the tour and are able to beat anyone on their day. Brown has beaten top players in tennis and he will want to show us that he can still compete, however, Benoit Paire is in much better form in the last few years. This will be a tight match, but Paire should edge it.