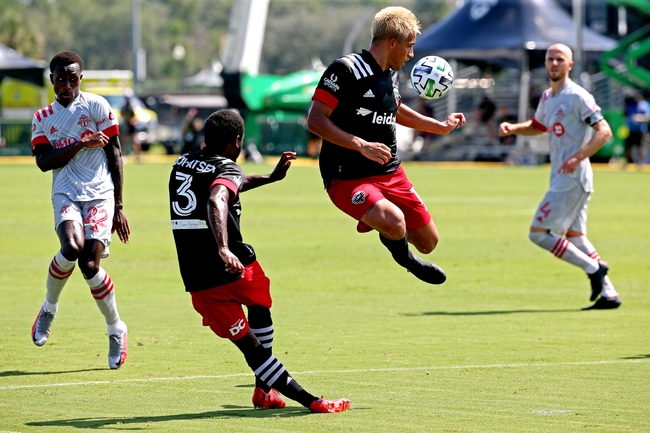 The New England Revolution are coming off a 1-0 victory over Montreal Impact in the team's first game in this MLS is Back Tournament. New England and Monreal combined for 18 fouls in the match, as it was a bit chippy at times. Montreal owned a 56% possession advantage, but the Impact was not able to get on the scoreboard in the loss. New England's only goal came in the 56th minute, as it was a beautiful strike by Gustavo Bou that gave the Revolution the lead. New England had 19 total shots, with four of those shots on target, as well as nine corner kicks. New England's defense stepped up in a big way during this match, even though Montreal did not have too many scoring opportunities. New England knows this DC United team very well, as the two teams have been in the MLS since its inaugural season in 1996.

DC United is coming off a tension-filled 2-2 draw against Toronto FC in its last match. DC United and Toronto FC's originally scheduled game was postponed due to some players on both teams testing positive for COVID-19. The match was rescheduled and played on July 13th, and it was a very entertaining one to watch, to say the least. Toronto FC controlled the first-half play, as Ayo Akinola scored two goals (12', 44') to give Toronto a 2-0 lead. Just before halftime, DC United and Toronto got into some more rough play, and DC United's Junior Moreno was sent off with a red card. You would think that this would pretty much settle the game, as Toronto had a 2-0 lead and an extra man for the rest of the match. That was not the case, as DC United found a goal from Federico Higuain in the 84th minute to cut the deficit in half. Frederic Brillant scored a brilliant header in the 90+1 minute to equalize the score and give DC United a point in a 2-2 final score.

I think DC United will be benefiting from a huge morale boost after such an incredible second-half performance against Toronto. New England was decent against Montreal, but the club did not impress me enough for me to not take DC United against the spread. I will take DC United +0.5, as it is too valuable for me to pass up.