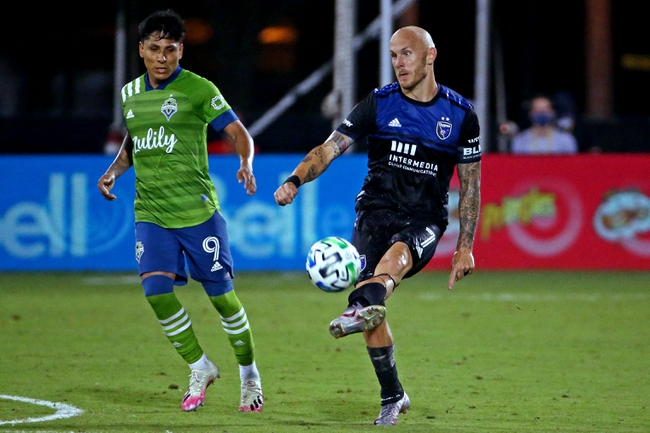 The Vancouver Whitecaps (WLLWD) and the San Jose Earthquakes (DLDLL) will meet on Wednesday, July 15th for a group stage match in the MLS is Back Tournament. This match will be the first that Vancouver has played in this tournament, and it will be played at 9:00 PM EST.

The Vancouver Whitecaps should have already gotten a match under its belt in the MLS is Back Tournament, but unfortunately, the team that the Whitecaps was supposed to play (FC Dallas) has now been removed from the entire tournament. Vancouver started the MLS regular season with a 1-0-1 record, which is not too shabby considering that Vancouver was the worst team in the Western Conference in 2019. Vancouver had only won a total of eight matches in 2019, therefore this team can only get better in 2020. Vancouver defeated the LA Galaxy, 1-0, in its win on March 7th. The loss for Vancouver came on February 29th in a 3-1 defeat to Sporting Kansas City at home.

San Jose was able to get a match played in this tournament on July 10th. That match resulted in a scoreless 0-0 draw to the defending champion Seattle Sounders, therefore San Jose is probably content with the one point. San Jose was the better team in this match as well, as the Earthquakes owned a 62% possession advantage in the draw. San Jose also threw 16 total shots on net, with eight of those shots making it on target. Seattle's Stefan Frei was sharp, and he had to be in order to hold that clean sheet.

The last time the Vancouver Whitecaps and San Jose Earthquakes met was on August 24th of 2019, and that match resulted in a 3-1 home victory for San Jose. Each team has beaten the other twice in the last five meetings (the other a 2-2 draw).

In this match, I have to take the team that is more prepared, has already been conditioned to play 90 minutes, and has more talent on its roster. San Jose should be able to play a full 90 minutes in this match, while Vancouver may get caught with weak legs as the game carries on. I will take the San Jose Earthquakes against the spread.

Get Premium Picks Start Winning Now »
The pick in this article is the opinion of the writer, not a PickDawgz site consensus.
Previous Pick
Sassuolo vs. Juventus 7/15/20 Serie A Soccer Prediction and Picks
Next Pick
Atlanta United FC vs. FC Cincinnati - 7/16/20 MLS Soccer Picks and Prediction