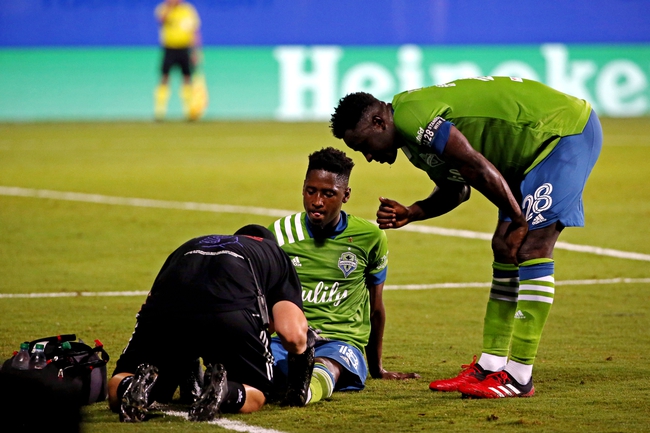 The Seattle Sounders and Chicago Fire face off in the group round stage of the MLS is back tournament from Orlando on Tuesday. Getting off to a fast start in group play is super important, which makes this game crucial for both squads. The Sounders have already played in a game in this tournament, while the Fire still haven’t played a game.

The Seattle Sounders are the defending MLS champions but at this point, this is a must-win or they could find themselves out of this tournament not even making it out of the group stage. To start the season the Sounders opened up with a win over the Chicago Fire 2-1. In that game, Jordan Morris scored two goals including one in stoppage time to come away with the win. In the second game Seattle came away with a 1-1 draw with the Columbus Crew.

In the first game of this tournament the Seattle Sounders faced off with the San Jose Earthquakes. In that game, the Sounders were outshot and had fewer shots on goal than San Jose. They couldn’t put a goal in that game and could only get one point out of the game.

For the Chicago Fire they are playing their first game of the tournament The Fire actually were moved to this group after Nashville had to be removed from the tournament. The Fire opened up their season with a loss against the Seattle Sounders. In that game, the Chicago Fire had only two shots on target and 46 percent possession.

In the second game of the season, the Chicago Fire played against the New England Revolution. The Fire did get a goal in the 70th minute from Jonathan Bornstein.to steal a point from the Revolution.

The defense hasn’t been terrible this season but the offense is going to need to find a way to keep possession if they want to come away with the win.

The Sounders have more firepower and they are going to find a way to get the job done in this game. At plus money, Seattle is a nice play on the money line at plus money.

Get Premium Picks Start Winning Now »
The pick in this article is the opinion of the writer, not a PickDawgz site consensus.
Previous Pick
LA Galaxy vs. Portland Timbers - 7/13/20 MLS Soccer Pick and Prediction
Next Pick
Chelsea vs. Norwich City - 7/14/20 Premier League Soccer Picks and Prediction