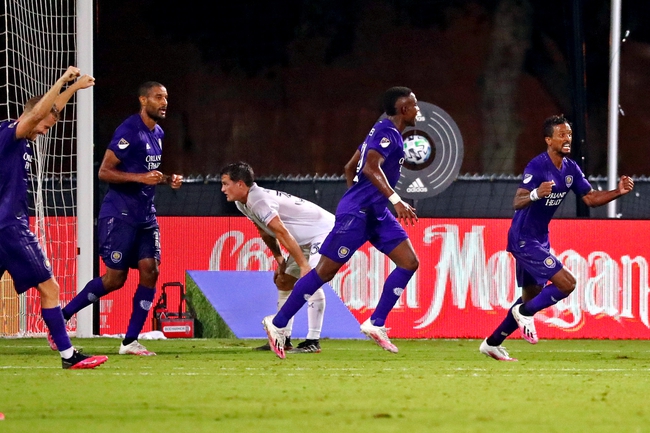 New York City FC (LLLLW) and Orlando City SC (WLDLD) will meet in group stage action for the MLS is Back Tournament. This will be each team's second match in this tournament, and the game will be played on Tuesday, July 14th. The match is scheduled for an 8:00 PM EST start time.

New York City FC is coming off a 1-0 loss to Philadelphia Union on July 9th in the team's MLS is Back Tournament opener. New York City FC's offensive woes continued, as the club has now not scored a single goal in its last four matches! Of course, all of those matches resulted in losses, but what makes it worse is the fact that they were all 1-0 losses. With so many close defeats, NYCFC has to feel that it has a chance to bounce-back, but the team needs to find the back of the net first. New York City FC owned a 59% possession advantage as well as a total shot advantage in the loss to Philly. NYCFC also had seven shots on target, but none of them went past Sean Blake, the goaltender of the Philadelphia Union.

Orlando City SC is coming off one of the most memorable games in the team's history, as Orlando won the first-ever Everglades battle against Inter Miami CF. Inter Miami struck first in this game, as Juan Agudelo scored a beauty in the 47th minute to give Miami the lead. Orlando City found the equalizer in the 70th minute with a strike from Chris Mueller (who had a stellar game). Then, when the game seemed as if it was going to end as a 1-1 draw, Orlando City's Nani was gifted a ball in the box that he buried it in the back of the net in the 90+7 minute to give Orlando the remarkable victory.

The last time NYCFC and Orlando City SC met was on July 10th of 2019, over one year ago. That match resulted in a 1-1 draw in front of the Orlando City faithful.

If it ain't broke, do not fix it, and that is regarding the under in NYCFC matches. The fact that New York City FC has not scored a goal and the total for each of the team's last four games has been at exactly 1 makes me take the under yet again in this match. At 2.5,3 I think it is the best bet between these two teams.

Get Premium Picks Start Winning Now »
The pick in this article is the opinion of the writer, not a PickDawgz site consensus.
Previous Pick
Atalanta vs. Brescia 7/14/20 Serie A Soccer Prediction and Picks
Next Pick
Philadelphia Union vs. Inter Miami CF - 7/14/20 MLS Soccer Pick and Prediction