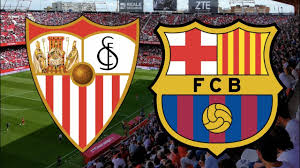 Sevilla enter this match in 3rd place on 51 points with a record of 14 wins, 9 draws and 6 losses after extending their unbeaten run within the league to six games with a 1-1 draw against Levante in their last match. In the tie with Levante, the first half was quiet with no scoring and no bookings, but Luuk de Jong would break the tie right out of the halftime interval to give Sevilla the lead. Sevilla looked destined to ride out de Jong’s tally to three points, but Levante would equalize in the 87th minute, effectively locking up the draw and splitting the points between the two sides. Lucas Ocampos leads Sevilla in scoring with 11 goals this season while Ever Banega has a team-high 6 assists. Tomas Vaclik leads Sevilla between the sticks as the top goaltender, conceding 0.98 goals per 90 minutes with 11 clean sheets in 28 league appearances this season.

Batcelona on the other hand, continue to sit in the driver’s seat with 64 points in 1st place, along with a record of 20 wins, 4 draws and 5 losses after back-to-back shutout wins since the restart with a 2-0 win over Leganes in their last match. In the victory over Leganes, Ansu Fati gave Barca the lead three minutes before halftime, and the lead would hold until Los Che thought they had a second goal in the 65th but VAR ruled that there was a player in an offside position in the buildup leading to the goal. Barcelona wouldn’t be denied their second goal though as Lionel Messi scored from the penalty spot in the 69th, giving Barcelona an insurance goal they wouldn’t end up needing as they would see things through to full time, picking up another three points. Messi leads Barcelona in scoring and assists with 21 goals and 14 assists while Luis Suarez has 11 goals with 8 assists and Antoine Griezmann has 8 goals on the year. Marc-Andre ter Stegen is Barcelona’s top goalkeeper, conceding 0.93 goals per 90 minutes with 10 clean sheets in 28 league appearances this season.

I’ve gone back and forth on this game as Sevilla will be Barca’s toughest test to this point since the restart and there’s a lot of plus money here for a top-3 matchup. However, Barcelona hasn’t lost to Sevilla in the league since 2015, and have outscored Sevilla 12-4 in the last three meetings alone. Would I be shocked if Sevilla pulled a result out at home? No, but the lack of supporters in the stands doesn’t help as it may have given the hosts an extra boost against the team to beat in La Liga. Ultimately, I think Barcelona win this game, but Sevilla goes down swinging, so I’ll take Barcelona to win with both teams to score to get some value out of the wager.