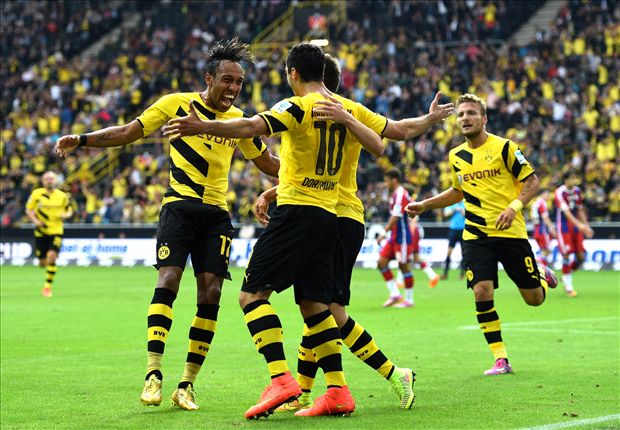 Borussia Dortmund and Bayern Munich square off in a heavyweight battle in German Bundesliga soccer action from Signal Iduna Park on Tuesday afternoon.

Borussia Dortmund enter this match in 2nd place, sitting on 57 points with a record of 17 wins, 6 draws and 4 losses after picking up a 2-0 win over VFL Wolfsburg in their last match. In the win over Wolfsburg, Raphael Guerreiro gave Dortmund the lead just after the half hour mark after a ball across the box from Thorgan Hazard and that goal held up until Achraf Hakimi put things away in the 78th minute to make it 2-0. Jadon Sancho leads Dortmund in scoring and assists with 14 goals and 16 assists this season while Erling Haaland has 11 goals and Thorgan Hazard has 6 goals and 12 assists. Marco Reus, who has 11 goals for Dortmund this season is not expected to play due to injury. Roman Burki is the #1 goaltender for BVB and is conceding 1.35 goals per 90 minutes with 10 clean sheets in 24 league appearances this season.

Bayern Munich will try to stave off Dortmund and get one hand on the Bundesliga trophy, sitting four points ahead on 61 points with a record of 19 wins, 4 draws and 4 losses following a 5-2 win over Eintracht Frankfurt in their last match. Leon Goretzka opened the scoring 17 minutes into the game before Thomas Muller doubled Munich’s lead just four minutes before the half. Robert Lewandowski pushed the lead to 3-0 with his 27th goal of the campaign just after halftime, but Frankfurt would come roaring back with two goals three minutes apart in the 52nd and 55th minutes respectively. Alphonso Davies restored the two-goal cushion just six minutes later right after the hour mark and a Frankfurt own goal pushed the lead to 5-2, a score that Bayern would carry to the finish line. Lewandowski leads Bayern with 27 goals this season while Serge Gnabry has 11 goals and Thomas Muller has 7 goals with a team-high 17 assists this season. Manuel Neuer is Bayern’s top goalkeeper, conceding 0.96 goals per 90 minutes with 11 clean sheets in 27 league matches this season.

This edition of Der Klassiker is massive as it gets as a Bayern win would surely give them the Bundesliga title, while Borussia need a win to come within one point and hope that Munich stumbles again. With all of that said, getting Bayern at this price is almost like getting a dog with heavy plus money in the +200 range at least. The problem is that Dortmund hasn’t lost at home this season, going 10-3-0 with 45 goals for and 10 against. Granted, none of those games were against Bayern and Munich has been tough to crack, but Bayern also had a severe lapse in concentration against Frankfurt and can ill afford one here against BVB. Getting the best home team in the Bundesliga at this price is too good for me to pass on right or wrong. I think Dortmund make the title chase interesting up until the end, so I’ll side with Dortmund for a key win and three points here.