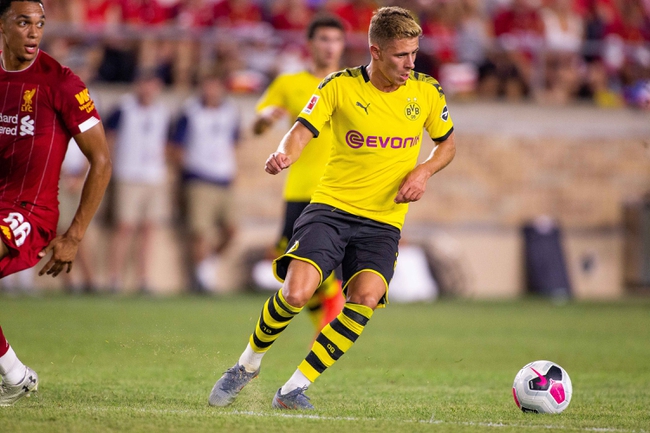 Borussia Dortmund and Schalke 04 meet in a Bundesliga soccer matchup from Signal Iduna Park in Dortmund on Saturday morning.

Borussia Dortmund enters this game sitting in 2nd place before the Bundesliga was halted due to the Coronavirus Pandemic, sitting with a record of 15 wins, 6 draws and 4 losses on 51 points, just four points behind league leaders and defending champion Bayern Munich. Dortmund is on a four-game winning streak within the league after a hard-fought 2-1 win over Borussia Monchengladbach in their last Bundesliga appearance. Thorgan Hazard opened the scoring for BVB just 8 minutes in and held onto the lead until halftime. Monchengladbach tied the game just five minutes after the interval before Achraf Hakimi got Dortmund the lead back with just under 20 minutes to go, helping secure all 3 points for the Yellow and Black. Jadon Sancho leads Dortmund with 14 goals and 15 assists while Marco Reus is close behind with 11 goals. Thorgan Hazard and Achraf Hakimi each have 10 assists this season as well. Roman Burki has played in 22 league games with 8 clean sheets and 1.47 goals conceded per game this season.

Schalke 04 went into the break in 6th place, just inside the European qualification spots with an overall record of 9-10-6. The Royal Blues come into this game on a six-game domestic winless run following a 1-1 draw with Hoffenheim in their last match before the Bundesliga was shut down. In the match against Hoffenheim, Weston McKinnie opened the scoring for Schalke just 20 minutes into the game but Hoffenheim owned the better part of the majority of play with 56% possession. Schalke made the most out of their chances with 15 shot attempts and 4 shots on goal, but Hoffenheim had a goal disallowed with VAR in the 66th minute but eventually broke through three minutes after to tie the game at one goal apiece, denying Schalke a victory once again. Suat Serdar leads Schalke 04 with 7 goals this season while Amine Harit is right behind with 6 goals and a team-high 4 assists. Alexander Nubel is the number one goaltender for Schalke this season, with 6 clean sheets in 20 matches played with an average of 1.32 goals conceded per match this season.

I think you could make the case that Schalke need the points, and with no spectators at these games, it pretty much negates the home advantage that Borussia would possess otherwise. However, there aren’t many chances for Dortmund to make up ground on Bayern the rest of the way in terms of trying to win the league, so Borussia need to take advantage of every opportunity they get as Munich doesn’t slip up often. Schalke’s 6th spot is the only reachable European slot for the few teams within sniffing distance of that spot, but I just think that Dortmund is too much here. The draw would’ve been worth a look if Schalke were in better form as five of the last eight head-to-head finished in a stalemate, but I think Dortmund win this one by a couple, so I’ll lay the -1 with Dortmund to start on the Asian handicap.