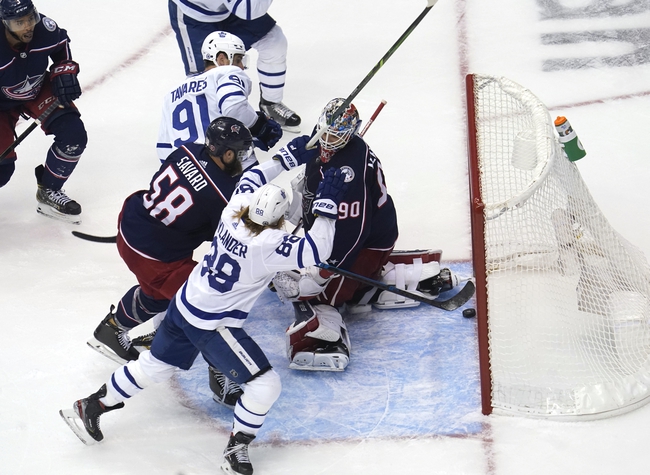 At 8:00 pm, our selection is on the Toronto Maple Leafs over Columbus.  There were eight first round, best-of-five playoff series in the 2020 NHL playoffs and this is the only one to go five games thanks to a crazy Game 4 in which the Maple Leafs prevailed on Friday night.  Down 3-0 with less than four minutes to go in the final period, the Leafs staged a furious comeback that took it into overtime.  They then prevailed in the extra stanza on an Auston Matthews power play goal.  It was just the 3rd time in NHL Playoffs history that a team came back to win after being down three goals with under four minutes to play.  Of course, it's also worth noting that, in Game 3, it was Columbus which came back from a three-goal deficit to win.  Thus, both teams will want to make sure they don't squander a lead tonight.  The Blue Jackets have now lost 14 of their last 19 games.  Even worse, Columbus' best defenseman, Zach Werenski, has been downgraded to 'doubtful' with an upper body injury.  That doesn't bode well for John Tortorella's men.  Nor does the fact that they are averaging just 1.78 expected goals per game in the series when playing at full strength.  I look for Toronto to close out Columbus tonight with a decisive win.  Take the Maple Leafs.  Good luck, as always...Al McMordie.

Al McMordie is the most honored technical handicapper in the country. Overall, in the last 28 years, Big Al has garnered 43 NUMBER ONE awards in football, basketball, baseball and hockey; 195 Top 5 finishes; and 368 Top 10 finishes.