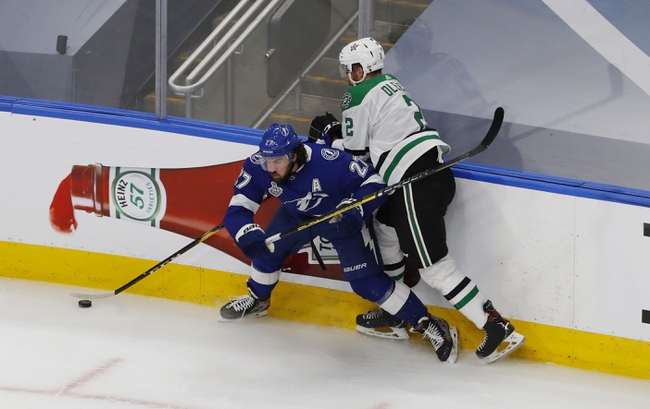 This is a play on the TAMPA BAY LIGHTNING for our NHL Monday Breakaway. We won with Dallas on Saturday banking on the fact it would clean up the penalties and it did just that. The Lightning had scored on six of their previous 12 power-play chances in the series. After penalties short-circuited them in their previous three losses, the Stars took just one Saturday, and they killed it. The double-overtime win cut the Tampa Bay series lead to 3-2 but we expect Tampa Bay to come out firing after scoring just two goals on 41 shots in Game Five. The Lightning have continually showed their resilience, and if they do it again, they will win the Stanley Cup for the first time since 2004 and for only the second time in franchise history. Tampa Bay has yet to lose consecutive games this postseason, bouncing back from each of its six losses with a win. The Lightning are 20-3 in their last 23 games when playing their 8th game in 14 days while going 45-8 in their last 53 games after scoring two goals or less in their previous game. Here, we play on teams in the second half of the season that have 30 or more shots in five straight games and with a starting goalie with a save percentage of .915 or better. This situation is 198-119 (62.5 percent) since 1996. 10* (1) Tampa Bay Lightning

Matt is on an AWESOME 8-2 MLB Run and has brought in MLB profits of +$21,225 the last 2+ years! Game Four Winner Saturday posted soon! For CFB Saturday, we are looking for the PERFECT 4-0 SWEEP!