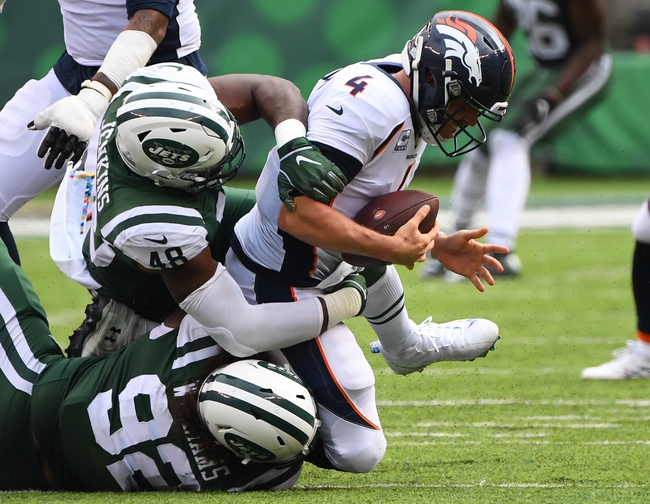 This is a play on the NEW YORK JETS for our NFL Thursday Star Attraction. The Jets have opened 0-3 and have arguably been the worst team in football with all three losses coming by double-digits. The play of Sam Darnold has been bad but there is reason for optimism. Last year, Darnold had a bad three-game stretch when he went 59-of-101 (58.42 percent) for 564 yards with three touchdowns and eight interceptions with a 50.9 quarterback rating. He bounced back in the final eight games of the season with 13 touchdowns and four interceptions. After losing to the Buccaneers on Sunday, Denver is now 0-3 and the Broncos have started consecutive years 0-3 for the first time in franchise history. They will reportedly turn to their third different starting quarterback this season as Brett Rypien is expected to start in place of the injured Drew Lock. Denver has now seen six starters go down to injuries just three weeks into the season. The Broncos are 8-23-1 ATS in their last 32 games after allowing more than 350 total yards in their previous game while the Jets are 4-1 ATS in their last five games as a home underdog. Here, we play on underdogs or pickems after allowing 17 points or more in the first half in two straight games against opponent after a loss by 10 or more points. This situation is 72-35 ATS (67.3 percent) since 1983. 10* (102) New York Jets

9-2 Football Weekend (5-1 NFL and 4-1 CFB) and weekend cards posted soon! Thursday plays are first up and ready to roll!