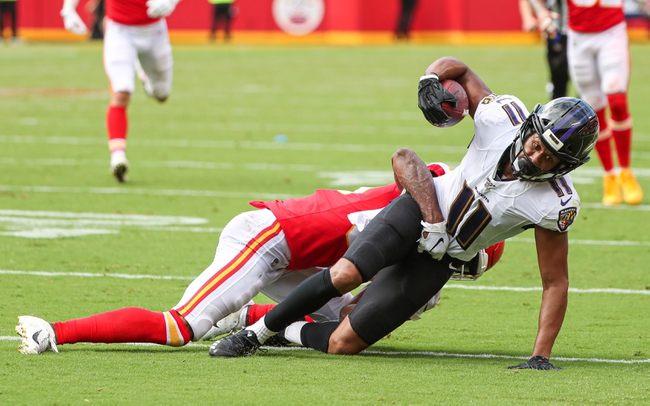 This is a play on the KANSAS CITY CHIEFS for our NFL Monday Star Attraction. A pair of streaks are on the line Monday. Baltimore closed the regular season with 12 straight wins and have now won 14 straight regular season games while the Chiefs will be bringing an 11-game winning streak into the game. Both teams come in a perfect 2-0 and the Ravens home field advantage is taken away here yet the Ravens come in as an overpriced favorite. Ravens quarterback Lamar Jackson is 21-3 during the regular season but two of those losses came against the Chiefs. Pass protection is an issue for Baltimore as in a win over the Texans last week, Jackson went down for four sacks, his highest single-game total since Week Five of last season and the Chiefs got him on the ground three times last season. While the Baltimore defense was and still is solid, Chiefs quarterback Patrick Mahomes threw for 377 yards and two touchdowns in that 2018 game, and last year pierced the Ravens for 374 yards and three scores. Kansas City is one of three teams in the NFL to not turn the ball over in the first two weeks which is right in line with their 2019 season where they were third in fewest giveaways. Here, we play on road underdogs or pickems that averaged 275 or more passing ypg last season, after allowing 8 or more passing ypa in their last game. This situation is 22-3 ATS (88 percent) since 1983. 10* (489) Kansas City Chiefs