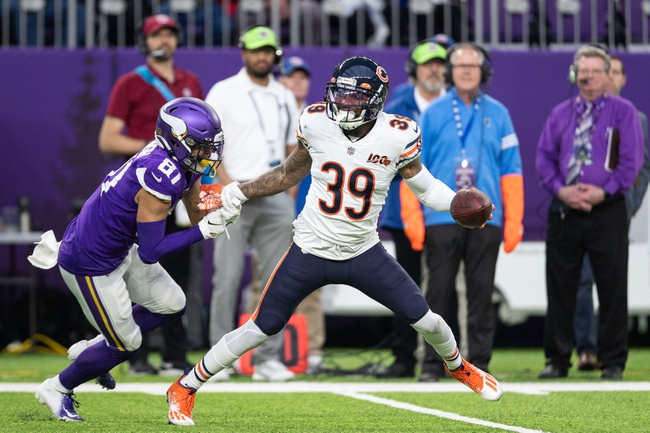 This is a play on the CHICAGO BEARS for our NFL Monday Star Attraction. Chicago has lost three straight games to fall to 5-4 on the season. The Bears were handled by the Rams without much resistance but they played a great game against New Orleans to lose in overtime and while they lost to Tennessee by a touchdown last week, they outgained the Titans by 147 total yards but they were -2 in turnovers. This included a fumble being returned 63 yards for a touchdown. The Vikings are coming off a pair of wins over Green Bay and Detroit to move to 3-5 on the season but they were +4 in turnovers in those two games. The Bears defense could be the difference here as they are ranked No. 9 overall and No. 7 in scoring defense. Dalvin Cook has just 86 yards on 34 carries in three career games against the Bears. Quarterback Kirk Cousins, since joining the Vikings in 2018, is 0-3 with just three touchdown passes, two interceptions and one lost fumble against Chicago. While the Bears offense has been an issue, the Vikings defense is struggling as they are No. 29 0verall, including No. 30 against the pass, and No. 25 in scoring defense. Chicago is 10-1 ATS in its last 11 home games against teams averaging 5.0 or more rushing ypc while going 19-4 ATS in their last 23 games after three consecutive games with a turnover margin of -1 or worse. Meanwhile, the Vikings are 2-12 ATS in their last 14 Monday games. 10* (276) Chicago Bears