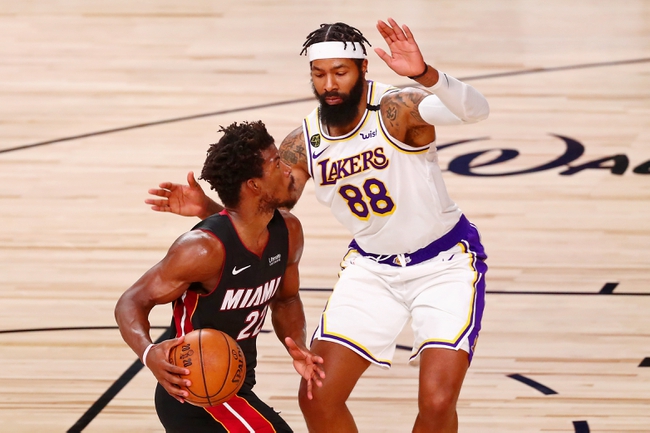 This is a play on the LOS ANGELES LAKERS for our NBA Tuesday Enforcer. Miami got back into the series with a Game Three win on Sunday behind an outstanding performance from Jimmy Butler. He had 40 points, 11 rebounds and 13 assists, including 10 points in the fourth quarter as the Lakers were making their last run. A big difference also was keeping Anthony Davis in check. In Game Two, the Lakers attempted an NBA Finals-record 47 three-pointers, which was also their season high. But it made life far too easy for Davis, who started going 14 of 15 from the field. All he had to do was sneak behind the zone and he was almost guaranteed easy points. He averaged 15.5 touches in the paint in his first 17 playoff games, but he got only five in Game Three. He also got into foul trouble and as a team Los Angeles committed 19 turnovers. Now it is time for the Lakers to adjust and we are confident they do so to take the commanding 3-1 lead in the series. Miami is 4-14 ATS in its last 18 games off a win by 10 points or more as an underdog while the are 22-7 ATS after having won three of their last four games this season. 10* (707) Los Angeles Lakers