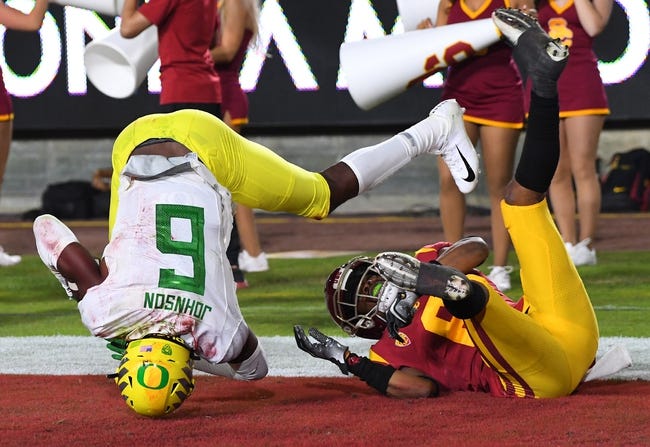 This is a play on the OREGON DUCKS for our CFB Friday Pac 12 Championship Winner. The Trojans first three opponents of the season, Arizona St., Arizona and Utah, were playing their 2020 openers when the Trojans lined up against them so they had edges facing teams that yet to take the field. USC is coming off a come-from-behind victory over UCLA, its third victory in five games where it had to come back and win in the final seconds. The Trojans will be without their leading rusher, Vavae Malepeai, who sprained his knee late against UCLA. The Ducks were on pace to win the division title until dropping their past two games on the road, 41-38 to Oregon St. and 21-17 to previously winless California. The Ducks finished second in the Pac-12 North Division behind Washington, but a COVID-19 spike in the Huskies program knocked them out of the title game Monday morning, putting Oregon in the championship game. Oregon is confident in the abilities of their own and fired up to show the nation what it can do. The Ducks are 4-0 ATS in their last four games against teams with a winning record while the Trojans are 4-10 ATS in their last 14 games after allowing more than 280 yards passing in their previous game. Here, we play on road underdogs after a game where they forced one or less turnovers going up against an opponent after three consecutive games where they forced three or more turnovers. This situation is 71-31 ATS (69.6 percent) since 1992. 10* (251) Oregon Ducks