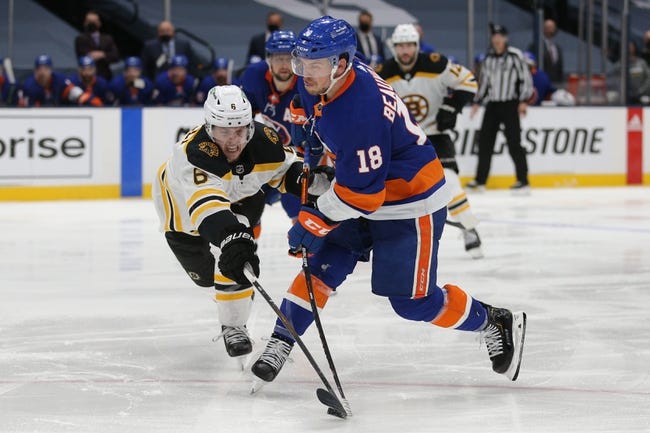 The Boston Bruins will head on the road to face the New York Islanders in game 4 of their 2nd round series in the East Conference NHL playoffs. Boston leads the series 2-1 after their overtime win in the last game.

The Islanders will look to bounce back after taking a tough loss on Thursday. They tied it up in the third to force OT but were quickly given the L on a goal 3 minutes into OT. Anthony Beauvillier leads the team with 4 goals and 9 points during the playoffs. Semyon Varlamov was in net for the Islanders, and he stopped 39 of 41 shots in 63 minutes of hockey. He was successful against the Bruins during the regular season and had a 1.93 GAA overall at home this year. Look for him to remain in net for the remainder of this series. The Islanders rank 6th of 16 with 3.5 goals per game at home this postseason.

The Bruins have won 4 of their last 5 games after their win in game 3. Brad Marchand leads the team with 29 goals and 69 points this season and was the hero with the OT winner in game 3. David Pastrnak leads the team with 5 goals and 10 points this postseason. Marchand and Pastrnak led the team with 7 points against the Islanders during the regular season. Tuukka Rask has started all 8 games for the Bruins this postseason. He has allowed just 1.93 goals per game and stopped 93.4% of the shots he has faced.

New York has been a much better team at home this season, ranking third with a .821-win percentage on their own ice. The Bruins played well in the last game, but this is a series that has been back and forth while remaining tightly contested. New York has defended home ice well all year and will be playing to avoid a 3-1 hole in the series. Varlamov has also done great in net since returning to the lineup for the Islanders. Look for the Islanders to get the job done to even things up.