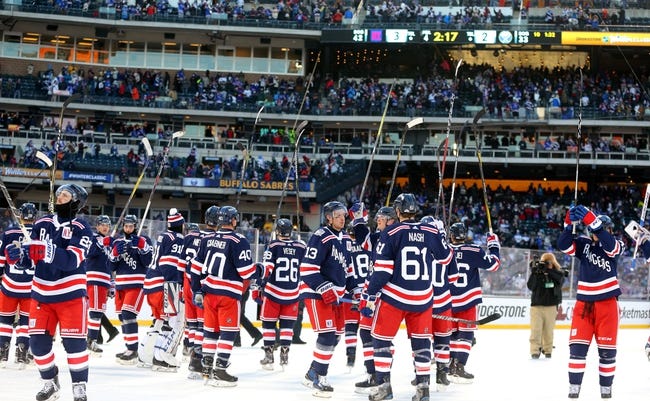 Where to Watch: MSG-B, MSG 2 Stream live sports and exclusive originals on ESPN+. Sign up now!

The New York Rangers and the Buffalo Sabres meet in NHL action from the KeyBank Center on Saturday night.

The New York Rangers will be out to build on their 3-2 win over Buffalo last time out. Ryan Strome and Artemi Panarin share the team-high in scoring with 34 points apiece with Strome logging 11 goals and 23 assists while Panarin has 25 apples this season. Pavel Buchnevich has 32 points with 14 goals and 18 assists while Adam Fox has 31 points with a team-high 27 assists. Mike Zibanejad’s on 28 points with 12 goals and 16 assists while Chris Kreider has a team-high 17 goals as part of his 24 points this season. As a team, New York is averaging 3.2 goals per game on 29.6 shots per game against with a 17.6% success rate on the PP while allowing 2.6 goals on 28.5 shots per game against with an 84.8% success rate killing off penalties this season.

The Buffalo Sabres will try to rebound from their loss to the Rangers in their last matchup. Sam Reinhart leads the Sabres in scoring with 23 points including a team-high 13 goals and 10 assists while Victor Olofsson has 21 points with 9 goals and 12 assists. Taylor Hall and Jack Eichel each have 18 points with 16 assists respectively this season while Brandon Montour and Rasmus Dahlin have 12 points apiece with a combined 18 assists between the two. As a team, Buffalo is averaging

Buffalo was able to finally get back in the win column a couple of games ago, but realistically, it was a case of old habits die hard as Buffalo rebounded with a loss against the Rangers and as much as I’m not trying to lay juice or the puck line with the Rangers here, there’s simply no other choice. New York is heads and shoulders the better team here and have been solid on the puck line on the road this year. I’ll back New York on the -1.5 puck line here.