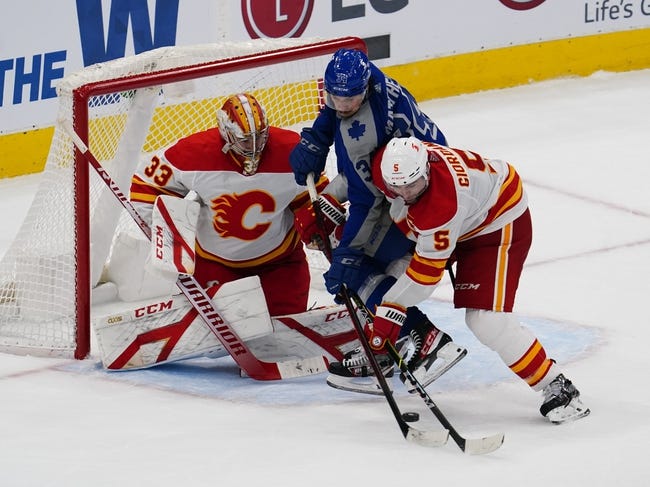 The Calgary Flames and the Toronto Maple Leafs meet in NHL action from Scotiabank Arena on Friday night.

The Calgary Flames will look to bounce back from a 7-3 loss to Edmonton last time out. Elias Lindholm leads the Flames in scoring with 27 points including 8 goals and a team-high 19 assists while Johnny Gaudreau and Matthew Tkachuk each have 24 points with Gaudreau logging a team-high 12 goals and 12 assists while Tkachuk has 17 assists and a team-high 94 shots on goal this season. As a team, Calgary is averaging 2.7 goals on 29.8 shots per game with a 20.2% success rate on the PP while allowing 2.9 goals per game on 30.2 shots per game against with an 80.9% success rate on the PK this season.

The Toronto Maple Leafs will look to rebound from a 4-3 loss to Ottawa last time out. Mitch Marner leads Toronto in scoring with 39 points including 11 goals and a team-high 28 assists while Auston Matthews has 36 points with a team-high 21 goals this season. As a team, Toronto is averaging 3.4 goals per game on 30.6 shots per game with a 29.9% success rate on the power play while allowing 2.6 goals on 28.6 shots per game while killing off penalties at a 75.6% clip this season.

I think a case could be made for both sides as Toronto’s the better and deeper team, but Freddie Andersen’s playing through and injury and the backups haven’t been reliable, mainly Michael Hutchinson. Calgary on the other hand has goal-scoring issues of their own, but I think this matchup ends up seeing 7+ goals so give me the over here.