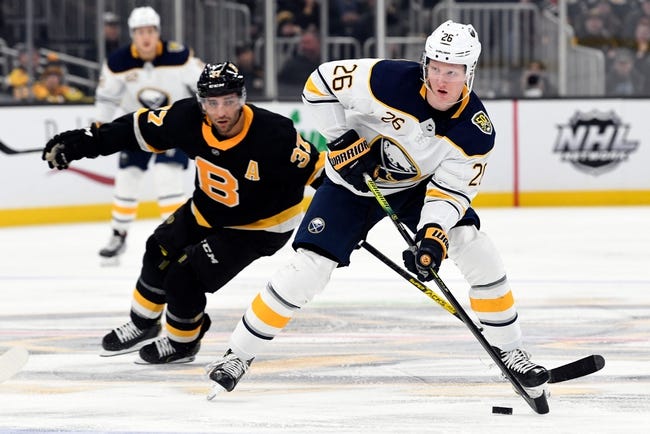 The Boston Bruins and the Buffalo Sabres meet in NHL action from the KeyBank Center on Thursday night.

The Boston Bruins come into this one looking to build on a 2-1 win over Pittsburgh in their last outing. Brad Marchand leads the Bruins in scoring with 33 points including 12 goals and a team-high 21 assists while Patrice Bergeron has 25 points with 10 goals and 15 assists and David Pastrnak has a team-high 13 goals as part of his 24 points this season. As a team, Boston is averaging 2.7 goals per game on 31.3 shots per game with a 24% success rate on the PP while allowing 2.4 goals per game on 26.6 shots against per game with an 88.8% mark on the penalty kill this season.

The Buffalo Sabres will try to snap a 12-game losing streak after a 3-2 loss to New Jersey last time out. Sam Reinhart and Victor Olofsson each have a team-high 19 points with Reinhart logging a team-high goals and Olofsson pitching in 11 assists. Jack Eichel has 18 points with a team-high 16 assists and Taylor Hall has 14 assists this season. As a team, Buffalo is averaging 2.1 goals per game on 27.8 shots per game with a 26.8% success rate on the power play while allowing 3.4 goals on 30.9 shots per game with an 80.3% success rate on the PK this season.

I get the allure of the plus money with Buffalo considering they just made a coaching change and Boston isn’t really playing their best hockey right now. However, that doesn’t excuse the double-digit losing streak that Buffalo is still on and it’s simply a matter of I’ll believe it when I see it with the Sabres as I need to see they’ve changed before trusting them with my hard earned money. Boston, despite their struggles, are still one of the elite teams in the NHL, and have had Buffalo’s number for a while now, especially in Buffalo. I’ll back Boston on the puck line in this one.