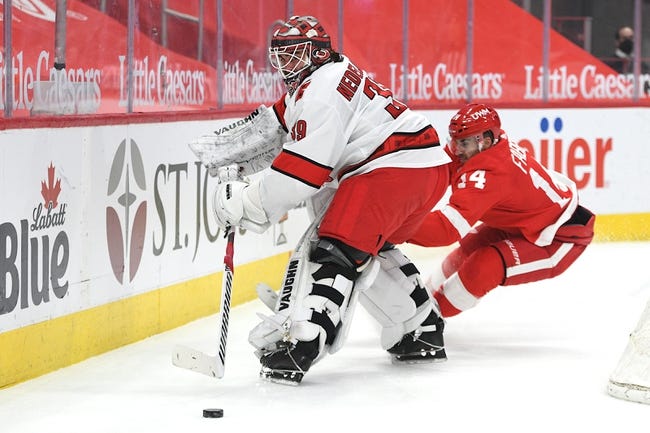 Where to Watch: FS-D, FS-CR Stream live sports and exclusive originals on ESPN+. Sign up now!

The Carolina Hurricanes and the Detroit Red Wings meet in NHL action from Little Caesars Arena on Tuesday night.

The Carolina Hurricanes will be out to build on their 2-1 win over Detroit last time out. Sebastian Aho leads the Hurricanes in scoring with 25 points including 10 goals and 15 assists while Vincent Trocheck has a team-high 13 goals as part of his 24-point tally this season. Andrei Svechnikov and Dougie Hamilton each have a team-high 78 shots on goal with Svechnikov logging 8 goals and 22 points while Hamilton has a team-high 18 assists. Nino Niederreiter also has 12 goals for Carolina this season. As a team, Carolina is averaging 3.4 goals per game on 31.4 shots per contest with a 32.2% success rate on the power play while allowing 2.8 goals per game on 29.2 shots against per game with an 82.4% success rate on the penalty kill this season.

The Detroit Red Wings will look to bounce back from yet another loss on the schedule at the hands of Carolina last time out. Filip Hronek leads Carolina in scoring and assists with 15 points with all 15 points coming via the assist while Anthony Mantha has 14 points with a team-high 8 goals this season. Bobby Ryan and Dylan Larkin each have 6 goals and 7 assists for the Red Wings as well this year. As a team, Detroit is averaging 2.3 goals per game on 28 shots per game with an 11% success rate on the PP while allowing 3.4 goals per game on 31.1 shots per contest and a 70.7% success rate on the PK this season.

The plus money with Detroit’s still worth a look as the Wings keep battling in spots where they should be down and out for the count. However, Carolina didn’t look their best in the first meeting and I think the ‘Canes really show up here and send a message to Detroit. I just don’t see the Red Wings hanging around for long one Carolina gets going, so I’ll back Carolina on the puck line in this one.