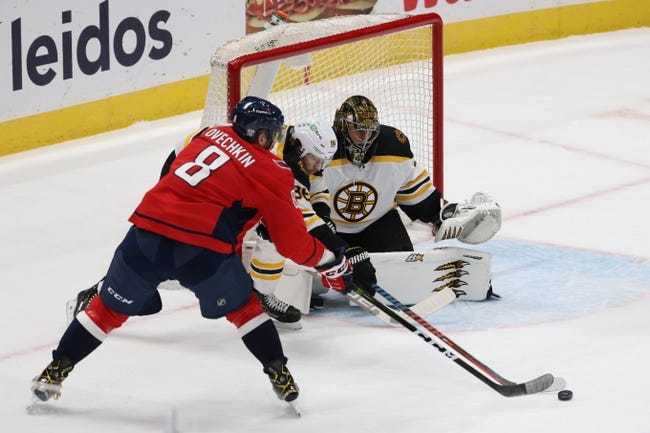 The Washington Capitals and the Boston Bruins meet in NHL action from the TD Garden on Wednesday night.

The Washington Capitals will look to add to their current three-game winning streak after a 3-2 win over New Jersey last time out. Nicklas Backstrom leads the Capitals in scoring with 25 points including team-highs of 10 goals and 15 assists while John Carlson has 19 points with 5 goals and 14 apples. Alex Ovechkin and Tom Wilson each have 17 points with 7 goals and 10 assists and Jakub Vrana and T.J. Oshie each have 14 points with Vrana splitting 7 goals and 7 assists while Oshie has 5 goals and 9 helpers. Vitek Vanacek has started the bulk of the games in goal for Washington, putting up 9 wins in 17 appearances with a 2.81 GAA this season.

The Boston Bruins will be out to build on their 4-1 win over the Rangers last time out. Brad Marchand leads the B’s in scoring with 10 goals and 13 assists for his 23-point tally this season while Patrice Bergeron has 8 goals and 12 assists for 20 points with a team-high 65 shots on goal. David Pastrnak has 18 points with 9 goals and 9 assists while Charlie McAvoy has 3 goals and 12 assists for his 15 points. Nick Ritchie has 14 points split up between 7 goals and 7 assists and David Krejci has 10 assists this season. Tuukka Rask continues to start in goal for Boston, going 8-4 with a 2.71 GAA in 12 appearances while Jaroslav Halak’s gone 4-3 with a shutout and a 2.42 GAA this season.

The two sides split the two meetings in Washington last month, and while this one is a tough one to call in terms of a side, I’m going to side with the over here as the game went over in each of the first two meetings with 8 and 9 goals respectively, and honestly the goaltending for both sides hasn’t been what it was to start the year with Boston giving up 13 goals in two games before rebounding last time out and Washington has just been shaky between Vanacek and Samsonov as well. I think another high-scoring affair is in store here.