Where to Watch: RSNW, TSN4 Stream live sports and exclusive originals on ESPN+. Sign up now!

The Calgary Flames and Toronto Maple Leafs meet Monday in NHL action at the Scotiabank Arena.

The Calgary Flames need a win after losing four of their last five games. The Calgary Flames are averaging 2.6 goals per game and are scoring on 20.3 percent of their power play opportunities. Johnny Gaudreau leads Calgary with nine goals, Elias Lindholm has 12 assists and Matthew Tkachuk has 62 shots on goal. Defensively, the Calgary Flames are allowing 2.8 goals per game and are killing 80.4 percent of their opponents power plays. Jacob Markstrom has allowed 41 goals on 452 shots faced and David Rittich has allowed 11 goals on 87 shots.

The Calgary Flames are in a bit of a rough patch right now and we just saw their defense get clobbered their last time out against the Oilers. Not good when going up against arguably the best team in the sport in the Toronto Maple Leafs. As I've said many times in the past, the Maple Leafs aren't a team you should be looking to step in front of, especially with the prices being reasonable. You can argue this line should be a lot steeper. I'll gladly back the Maple Leafs. 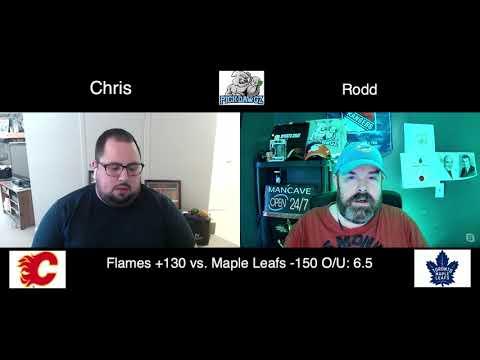