Where to Watch: FS-O, FS-TN Stream live sports and exclusive originals on ESPN+. Sign up now!

The Nashville Predators and the Columbus Blue Jackets meet in NHL action from Nationwide Arena on Thursday night.

The Nashville Predators will look to bounce back from a 4-2 loss to Detroit in their last matchup. Filip Forsberg leads the Preds in scoring with 14 points including 7 goals and 7 assists while Matt Duchene and Roman Josi each have 8 points with Duchene posting 3 goals and 5 helpers while Josi’s got 2 goals and 6 assists. Mikael Granlund, Ryan Ellis and Viktor Arvidsson each have 7 points with Granlund logging 3 goals and 4 assists and Ellis and Arvidsson each having 2 goals with 5 assists. Juuse Saros and Pekka Rinne have each made 9 appearances with 3 wins, with Rinne logging a 2.74 GAA while Saros has a 3.66 GAA on the year.

The Columbus Blue Jackets will be out to bounce back from a 7-3 loss to Carolina last time out. Oliver Bjorkstrand and Cam Atkinson each have a team-high 13 points with Bjorkstrand logging 4 goals with 9 assists while Atkinson’s got 6 goals and 7 helpers. Jack Roslovic has 10 points with 4 goals and 6 assists while Patrik Laine’s got 9 points with 6 goals and 3 assists. Nick Foligno and Boone Jenner each have 9 points as well, with Jenner recording 5 goals and 4 assists while Foligno’s flipped with 4 goals and 5 helpers. Joonas Korpisalo and Elvis Merzlikins each have a fair share of work done in Columbus’ goal this season, with Korpisalo logging 5 wins and a 3.55 GAA in 12 appearances while Merzlikins has a pair of wins and a 2.95 GAA in 7 appearances this year.

I get the case you could make for either side here, but to be honest, I don’t want anything to do with Nashville on the road right now. The Predators are a team that’s had the majority of their success at home, but when they leave their home base, everything goes upside down. Columbus hasn’t been strong out of the gate, but they usually do their best work at home and I just think that they’re the better option here so I’ll lay it and play it with Columbus here. 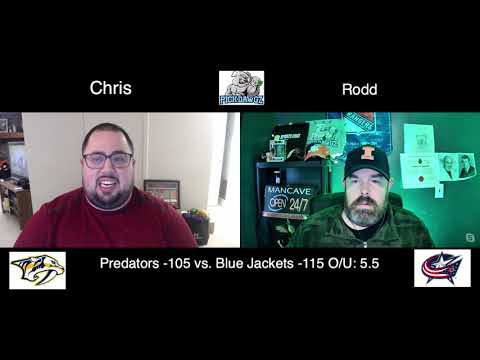