Where to Watch: MSGB, NSWA Stream live sports and exclusive originals on ESPN+. Sign up now!

The Buffalo Sabres and Washington Capitals meet Thursday in NHL action at the Capital One Arena.

The Buffalo Sabres look to snap a three-game losing streak. The Buffalo Sabres are averaging 2.6 goals per game and are scoring on 31.7 percent of their power play opportunities. Victor Olofsson leads Buffalo with five goals, Jack Eichel has nine assists and Rasmus Dahlin has 34 shots on goal. Defensively, the Buffalo Sabres are allowing 3.1 goals per game and are killing 80 percent of their opponents power plays. Carter Hutton has given up 13 goals on 128 shots faced and Linus Ullmark has given up 19 goals on 216 shots.

The Buffalo Sabres have yet to fulfill expectations this season and have looked sluggish since returning from their lengthy layoff. However, the Washington Capitals haven't exactly been world beaters up to this point, are still dealing with injuries, and the Sabres won the last meeting about three weeks ago. The Caps should probably be favored on their home ice, but this is a lot of money to turn down with the Sabres. 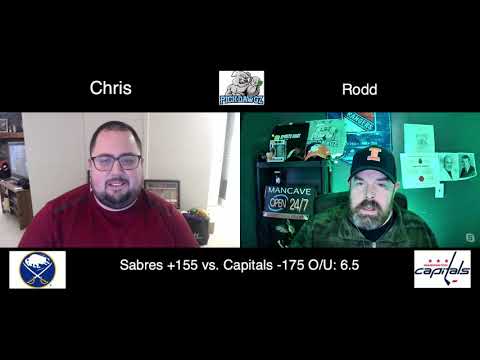