Where to Watch: TVA Stream live sports and exclusive originals on ESPN+. Sign up now!

The Ottawa Senators and Toronto Maple Leafs meet Wednesday in NHL action at the Scotiabank Arena.

The Ottawa Senators need another win to rebound from a 4-12-1 record. The Ottawa Senators are averaging 2.4 goals per game and are scoring on 12.5 percent of their power play opportunities. Tim Stutzle leads Ottawa with four goals, Nikita Zaitsev has six assists and Brady Tkachuk has 68 shots on goal. Defensively, the Ottawa Senators are allowing 4.1 goals per game and are killing 73.7 percent of their opponents power plays. Matt Murray has allowed 37 goals on 314 shots faced and Marcus Hogberg has allowed 30 goals on 215 shots.

The Ottawa Senators have quietly won back to back games and just beat the Maple Leafs as massive underdogs on Monday. However, the Toronto Maple Leafs were up 5-1 in that game and then completely fell apart in the third period, something that likely doesn't happen again. The Maple Leafs are head and shoulders the better team here and probably bring more focus to the table this time around. Only way for me to go here is to lay the PL with the Maple Leafs. 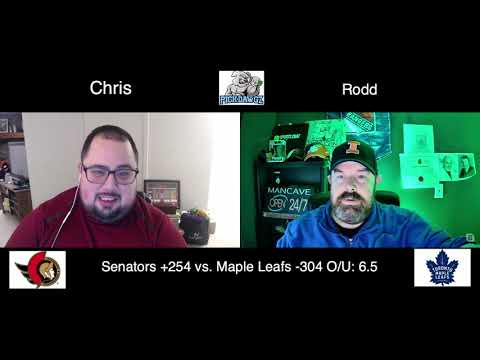