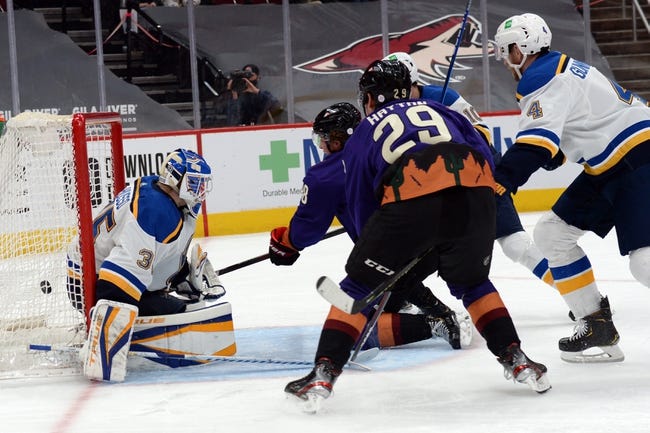 The St. Louis Blues and the Arizona Coyotes meet in NHL action from the Gila River Arena on Monday afternoon.

The St. Louis Blues will be out to build on a 5-4 overtime win over the Coyotes in their last matchup. David Perron leads the Blues in scoring with 15 points including 5 goals and 10 assists while Ryan O’Reilly and Jordan Kyrou each have 14 points with O’Reilly logging 5 goals and 9 assists while Kyrou has 6 goals and 8 helpers. Brayden Schenn has 7 goals and 6 assists for his 13 points and Mike Hoffman’s got 10 points split between 5 goals and 5 assists this year. Jordan Binnington’s seen the bulk of the action in goal for St. Louis, picking up seven wins in 11 appearances with a 2.50 GAA this season.

The Arizona Coyotes will look to bounce back after the frustrating OT loss to St. Louis last time out. Conor Garland leads the Coyotes in scoring with 14 points including 6 goals and 8 assists while Christian Dvorak is right behind with 13 points including 7 goals and 6 helpers and Nick Schmaltz has 6 goals and 6 assists for his 12 points. Jakob Chychrun has 11 points with 8 assists and 3 goals and Clayton Keller has 9 points with 4 goals and 5 assists and Phil Kessel has 8 points split between 4 goals and 4 assists this season. Darcy Kuemper’s seen the majority of the action between the pipes for Arizona, registering 4 wins with a 2.46 GAA this season.

I get the case that could be made for either side as St. Louis is the better team and Arizona’s already beat the Blues on multiple occasions this year. However, with that said, I think these two teams have faced each other enough in the last week or two to really know what they’re getting into and can probably guess what the other team is thinking before they even think it. When two teams play each other so much, and know each other so well, it’s hard to find those open edges and I think that’s the case here as we have a tight game where neither side gives much up and this game comes in under the number.