Where to Watch: TSN5, TSN4 Stream live sports and exclusive originals on ESPN+. Sign up now!

The Ottawa Senators and Toronto Maple Leafs meet Monday in NHL action at the Scotiabank Arena.

The Ottawa Senators need a win here to rebound from a 3-12-1 record. The Ottawa Senators are averaging 2.1 goals per game and are scoring on 13.1 percent of their power play opportunities. Tim Stutzle leads Ottawa with four goals, Nikita Zaitsev has six assists and Brady Tkachuk has 64 shots on goal. Defensively, the Ottawa Senators are allowing four goals per game and are killing 74.5 percent of their opponents power plays. Matt Murray has allowed 37 goals on 314 shots faced and Marcus Hogberg has allowed 25 goals on 177 shots.

This line is downright insane and sometimes I'll take a shot with the massive underdog because we don't get these prices often. However, the Ottawa Senators continue to make a case as the worst team in the league with a defense that couldn't stop you or me from finding the back of the net. This is the best stretch of hockey the Toronto Maple Leafs have played in quite some time and all of their playmakers should be licking their chops for this matchup. I'll take the Maple Leafs and the PL. 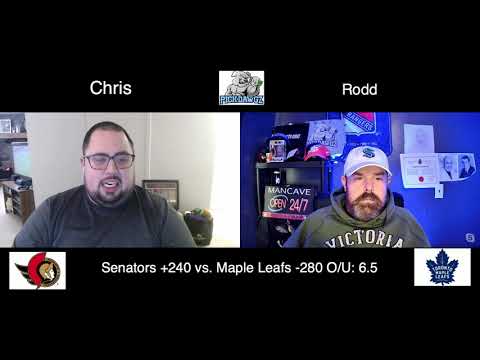