Where to Watch: NESN, MSG+ Stream live sports and exclusive originals on ESPN+. Sign up now!

The Boston Bruins and New York Islanders meet Saturday in NHL action at the Nassau Coliseum.

The Boston Bruins look to build on their five-game winning streak. The Boston Bruins are averaging 3.1 goals per game and are scoring on 31.6 percent of their power play opportunities. Brad Marchand leads Boston with eight goals, Charlie McAvoy has 10 assists and Patrice Bergeron has 44 shots on goal. Defensively, the Boston Bruins are allowing 2.2 goals per game and are killing 88.4 percent of their opponents power plays. Tuukka Rask has given up 19 goals on 202 shots faced and Jaroslav Halak has allowed seven goals on 91 shots.

The Boston Bruins are on quite a heater, becoming tougher to step in front of and have beaten up on the Islanders over the years. The Bruins probably should be favored in this spot. However, the New York Islanders are catching the Bruins on the end of a back to back, and they're capable of playing far better than what they've shown these last two weeks. I find some value on the Islanders here in the underdog role. I'll take it. 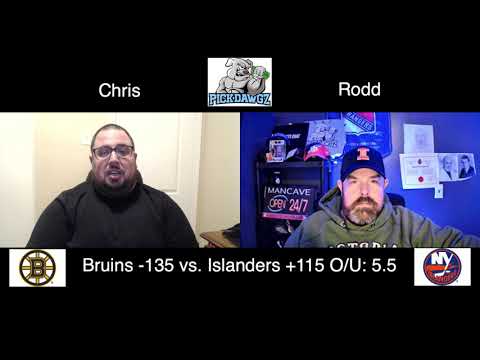