Where to Watch: TSN5, TSN3 Stream live sports and exclusive originals on ESPN+. Sign up now!

The Ottawa Senators and Winnipeg Jets meet Thursday in NHL action at the Bell MTS Place.

The Winnipeg Jets look for a win after splitting their last eight games. The Winnipeg Jets are averaging 3.4 goals per game and are scoring on 21.4 percent of their power play opportunities. Nikolaj Ehlers leads Winnipeg with eight goals, Mark Scheifele has 10 assists and Andrew Copp has 35 shots on goal. Defensively, the Winnipeg Jets are allowing 2.8 goals per game and are killing 79.4 percent of their opponents power plays. Connor Hellebuyck has given up 23 goals on 258 shots faced and Laurent Brossoit has given up nine goals on 110 shots.

The Ottawa Senators continue to provide no betting value, as the losses keep piling up and the defensive effort has been horrible to say the last. The Winnipeg Jets have been hit or miss over the course of the season, but they do have three wins against the Senators, which includes outscoring them 14-7. I have no choice but to side with the Jets here, and I'll lay the juice, as I've been burned a few times lately laying the PL. 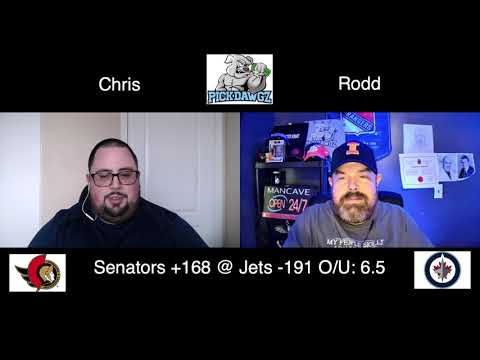