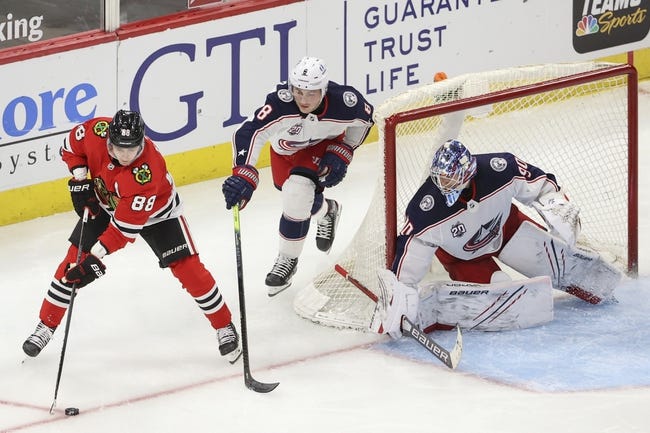 Where to Watch: NBCSCH, FS-O Stream live sports and exclusive originals on ESPN+. Sign up now!

The Columbus Blue Jackets and the Chicago Blackhawks meet in NHL action from the United Center on Thursday night.

The Columbus Blue Jackets will look to build on a 3-2 win over Carolina in their last matchup. Oliver Bjorkstrand leads the Blue Jackets in scoring with 11 points with 4 goals along with 7 assists while Alex Texier has 8 points with 4 goals and 4 helpers. Jack Roslovic and Nick Foligno each have 7 points with Roslovic logging 5 assists while Foligno has 4 goals and 3 helpers. Five more Blue Jackets have 6 points apiece,  with Patrik Laine logging 5 goals while Boone Jenner and Cam Atkinson each having 3 goals with 3 assists. Eric Robinson has 2 goals and 4 assists and Seth Jones has 5 assists for the Blue Jackets this season. Joonas Korpisalo and Elvis Merzlikins each have split the goaltending duties for Columbus, with Korpisalo logging 4 wins with a 3.14 GAA while Merzlikins has a 2.76 GAA and a pair of victories this season.

The Chicago Blackhawks will look to build on their three-game winning streak after a 2-1 win over Dallas last time out. Patrick Kane leads the Blackhawks in scoring with 17 points including 6 goals and 11 assists while Alex DeBrincat and Dominik Kubalikeach have 12 points with DeBrincat logging 6 goals and 6 helpers and Kubalik chipping in 9 assists. Mattias Janmark has 9 points with 5 goals and 4 assists and Dylan Strome and Pius Suter each have 8 points on the year. Kevin Lankinen leads the charge in goal for Chicago, going 5-2 with a 2.17 GAA for the Blackhawks this season.

I’ve taken a long hard look at this game and thinking about it, I think we’ve got an under brewing in this one. The Blue Jackets like to play a physical, lower-scoring style of hockey to begin with and the Chicago Blackhawks seem to have found something with Kevin Lankinen in net as he appears to be the goaltender of the future for the team. I just think we’re staying under 5.5 no matter who wins this game, so give me the under in this spot.