Where to Watch: RSNW, RSNP Stream live sports and exclusive originals on ESPN+. Sign up now!

The Calgary Flames and Vancouver Canucks meet Thursday in NHL action at the Rogers Arena.

The Calgary Flames look for a win after splitting their first 12 games. The Calgary Flames are averaging 2.9 goals per game and are scoring on 24.5 percent of their power play opportunities. Johnny Gaudreau leads Calgary with seven goals, Elias Lindholm has nine assists and Matthew Tkachuk has 39 shots on goal. Defensively, the Calgary Flames are allowing 2.8 goals per game and are killing 78.6 percent of their opponents power plays. Jacob Markstrom has allowed 25 goals on 296 shots faced and David Rittich has allowed seven goals on 49 shots.

The Calgary Flames have been hit or miss this season and haven't had much success stringing wins together, but they're much better than what the Canucks have going on right now. The Vancouver Canucks have not only lost five straight, but their goalies haven't been good and they've been outscored by the Flames  8-2 in the last two meetings. Hard not to side with the Flames and the rather cheap price. 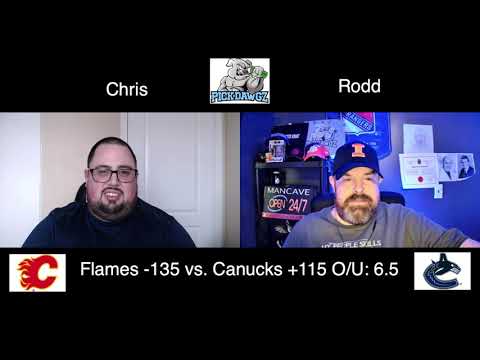