Where to Watch: FSSD, ATRM Stream live sports and exclusive originals on ESPN+. Sign up now!

The Anaheim Ducks and Vegas Golden Knights meet Thursday in NHL action at the T-Mobile Arena.

The Anaheim Ducks need a win after losing five of their last seven games. The Anaheim Ducks are averaging two goals per game and are scoring on 9.4 percent of their power play opportunities. Max Comtois leads Anaheim with five goals, Carter Rowney has six assists and Rickard Rakell has 47 shots on goal. Defensively, the Anaheim Ducks are allowing 2.7 goals per game and are killing 86.5 percent of their opponents power plays. John Gibson has given up 25 goals on 305 shots faced and Ryan Miller has given up 12 goals on 114 shots.

The Anaheim Ducks have been competitive this season, but they don't have enough offensive firepower to finish games and it's led to a lot of frustrating losses. The Vegas Golden Knights are on a nice little winning streak, and they just dropped five goals on the Ducks, something they've done in four of the last five meetings against them. I'll back the Vegas Golden Knights and take the PL to shave down an expensive ML price. 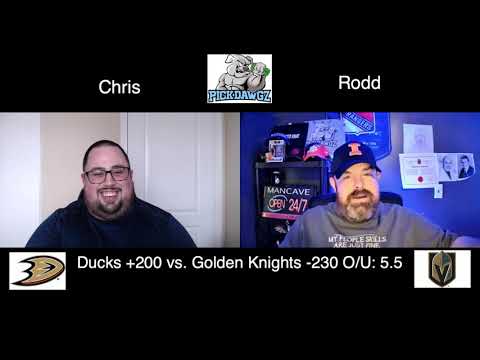