Where to Watch: TSN2, TSN5 Stream live sports and exclusive originals on ESPN+. Sign up now!

The Montreal Canadiens and Ottawa Senators meet Saturday in NHL action at the Canadian Tire Centre.

The Ottawa Senators need a win here to rebound from a rough 2-8-1 record. The Ottawa Senators are averaging 2.4 goals per game and are scoring on 13.6 percent of their power play opportunities. Tim Stutzle leads Ottawa with four goals, Nikita Zaitsev has five assists and Brady Tkachuk has 48 shots on goal. Defensively, the Ottawa Senators are allowing 4.8 goals per game and are killing 70 percent of their opponents power plays. Matt Murray has allowed 30 goals on 224 shots faced and Marcus Hogberg has allowed 19 goals on 122 shots.

The Ottawa Senators are coming off probably their best showing of the season with a victory over the Habs, but it's going to take more than that for me to get behind this club. The Senators haven't done much right up to this point and they're still one of the worst defensive teams in the league. The Montreal Canadiens are playing well and have dominated this rivalry over the last few years. Give me the Canadiens and the PL to shave down an expensive ML price. 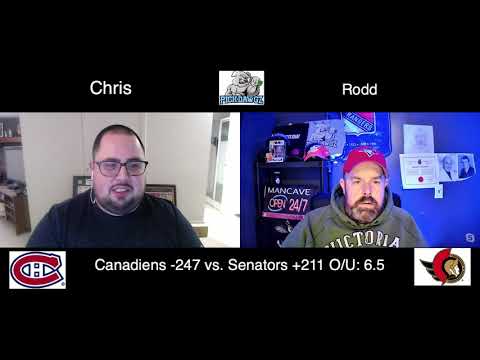