The Calgary Flames and Winnipeg Jets meet Thursday in NHL action at the Bell MTS Place.

The Calgary Flames look for a win after splitting their last eight games. The Calgary Flames are averaging 2.9 goals per game and are scoring on 27.8 percent of their power play opportunities. Johnny Gaudreau leads Calgary with six goals, Elias Lindholm has nine assists and Matthew Tkachuk has 34 shots on goal. Defensively, the Calgary Flames are allowing 2.5 goals per game and are killing 76.7 percent of their opponents power plays. Jacob Markstrom has allowed 16 goals on 211 shots faced and David Rittich has allowed seven goals on 49 shots.

The Winnipeg Jets look for a win after splitting their last six games. The Winnipeg Jets are averaging 3.6 goals per game and are scoring on 22.9 percent of their power play opportunities. Nikolaj Ehlers leads Winnipeg with six goals, Mark Scheifele has nine assists and Andrew Copp has 33 shots on goal. Defensively, the Winnipeg Jets are allowing 3.1 goals per game and are killing 75 percent of their opponents power plays. Connor Hellebuyck has given up 19 goals on 205 shots faced and Laurent Brossoit has given up nine goals on 110 shots.

These teams have played twice already this month and split both games down the middle. However, it's fair to say the Jets were the better team overall in those games and could have easily won both contests. While there's been up and down play from both sides, I still give the edge here to the Jets because of their explosive offense. I'll take the chopper price with the Jets in this third meeting this season. 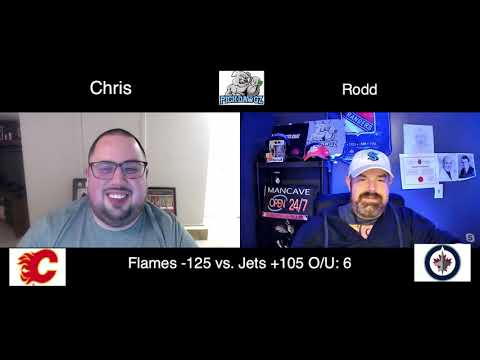