The Calgary Flames and Winnipeg Jets meet Monday in NHL action at the Bell MTS Place.

The Calgary Flames look for a win after splitting their last six games. The Calgary Flames are averaging 2.9 goals per game and are scoring on 29.4 percent of their power play opportunities. Johnny Gaudreau leads Calgary with five goals, Elias Lindholm has six assists and Matthew Tkachuk has 28 shots on goal. Defensively, the Calgary Flames are allowing 2.4 goals per game and are killing 80.8 percent of their opponents power plays. Jacob Markstrom has allowed 13 goals on 183 shots faced and David Rittich has allowed four goals on 21 shots.

The Winnipeg Jets look for a win after winning five of their last seven games. The Winnipeg Jets are averaging 3.6 goals per game and are scoring on 19.4 percent of their power play opportunities. Nikolaj Ehlers leads Winnipeg with five goals, Mark Scheifele has seven assists and Andrew Copp has 29 shots on goal. Defensively, the Winnipeg Jets are allowing 3.1 goals per game and are killing 72.7 percent of their opponents power plays. Connor Hellebuyck has given up 16 goals on 177 shots faced and Laurent Brossoit has given up seven goals on 79 shots.

It's usually a competitive contest when the Flames and Jets meet, so you can make a case for either side here. However, the Jets are playing the better hockey and have a decent edge on the offensive side. The Jets also beat the Flames this season already, coming back after giving up three goals in the first period. The Jets are just never out of a game with this offensive firepower. I'll back the home team. 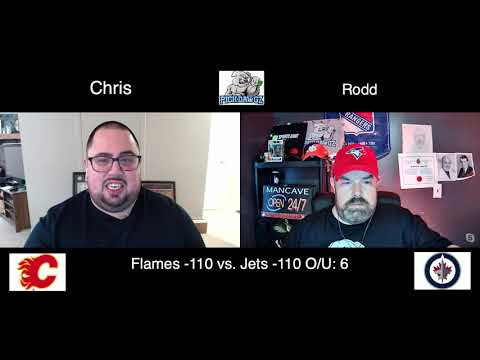