Where to Watch: CBC Stream live sports and exclusive originals on ESPN+. Sign up now!

The Vancouver Canucks and Winnipeg Jets meet Saturday in NHL action at the Bell MTS Place.

The Winnipeg Jets look to stay hot after winning four of their last five games. The Winnipeg Jets are averaging four goals per game and are scoring on 20 percent of their power play opportunities. Nikolaj Ehlers leads Winnipeg with five goals, Mark Scheifele has seven assists and Andrew Copp has 25 shots on goal. Defensively, the Winnipeg Jets are allowing three goals per game and are killing 68.4 percent of their opponents power plays. Connor Hellebuyck has given up 13 goals on 139 shots faced and Laurent Brossoit has given up seven goals on 79 shots.

You could make a case for either of these teams that are playing well and have had a really solid week, but it's the Jets who have dominated this series over the years. The Winnipeg Jets have won beaten the Canucks in 14 of the last 16 meetings, and that includes a 4-0 victory a couple of weeks ago. The Jets have outscored the Canucks 9-1 in the last three meetings. There's not a whole lot more to think about. The Jets own the Canucks. I'll gladly lay the cheap price. 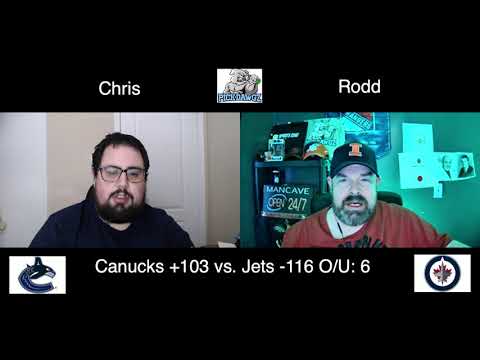