Where to Watch: NBCS-DC, MSG+2 Stream live sports and exclusive originals on ESPN+. Sign up now!

The New York Islanders and the Washington Capitals meet in NHL action from Capital One Arena on Thursday night.

The New York Islanders will look to bounce back from a 3-2 loss to the Caps last time out. Mathew Barzal leads the Isles in scoring with 6 points including 3 goals and 3 assists while Jordan Eberle and Noah Dobson each have 4 points with Eberle logging 2 goals and 2 assists while Dobson has 3 assists this year. Anders Lee and Nick Leddy each have 3 points with Lee putting up a pair of goals and Lee registering 3 assists as well this year. Semyon Varlamov’s put up solid numbers early on, going 3-1 with a 1.00 GAA while Ilya Sorokin has an 0-2 mark with a 3.57 GAA this season.

The Washington Capitals will look to add to their seven-game point streak to start the year after the win over the Islanders last time out. Nicklas Backstrom leads the Capitals in scoring with 8 poings including 4 goals and 4 assists while John Carlson has 7 points with 2 goals and 5 assists. Jakub Vrana, T.J. Oshie and Tom Wilson all have 6 points with Vrana and Wilson logging 3 goals and 3 assists each while Oshie has 2 goals and 4 assists. Alex Ovechkin will miss this game as well but still has a goal and 4 assists as well for the Caps this year. Vitek Vanecek’s taken over with Ilya Samsonov on the shelf for a couple of more games, with Vanecek going 3-1 with a 2.70 GAA this season.

I get why the Islanders are favored as they’re well-coached, disciplined and most importantly, fully healthy and at full strength. However, if it isn’t broken, don’t try to fix it. Washington has a next man up mentality and the Caps have just gone game after game, battling and not going down without a fight. The thing is that those battles have gone Washington’s way more often than not and the Capitals continue to provide value because of it. I’ll take my shot with Washington and the plus money here as well. 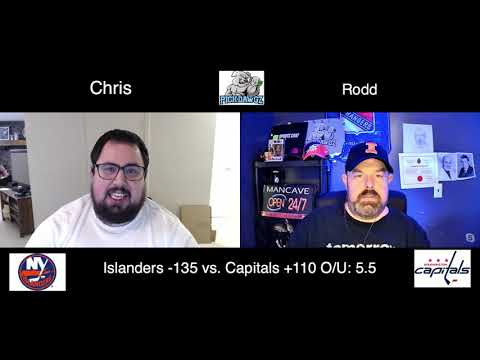