Where to Watch: KCOP, FSAZ+ Stream live sports and exclusive originals on ESPN+. Sign up now!

The Anaheim Ducks and Arizona Coyotes meet Thursday in NHL action at the Gila River Arena.

The Anaheim Ducks look for a win after splitting their last six games. The Anaheim Ducks are averaging 1.8 goals per game and are scoring on zero percent of their power play opportunities. Max Comtois leads Anaheim with three goals, Carter Rowney has four assists and Rickard Rakell has 22 shots on goal. Defensively, the Anaheim Ducks are allowing 2.3 goals per game and are killing 89.5 percent of their opponents power plays. John Gibson has given up 10 goals on 191 shots faced and Ryan Miller has given up three goals on 32 shots.

The Arizona Coyotes need a win after losing four of their last five games. The Arizona Coyotes are averaging 2.8 goals per game and are scoring on 20.8 percent of their power play opportunities. Phil Kessel leads Arizona with four goals, Jakob Chychrun has four assists and Conor Garland has 27 shots on goal. Defensively, the Arizona Coyotes are allowing three goals per game and are killing 80.8 percent of their opponents power plays. Darcy Kuemper has given up 15 goals on 173 shots faced and Antti Raanta has given up three goals on 34 shots.

The Arizona Coyotes aren't a team that I'm eager to lay juice with, but they're better than what they've shown up to this point and will turn things around eventually. The Anaheim Ducks have had issues stringing together wins dating back to last season and they don't win games they're supposed to win. The Coyotes also had their chances to beat the Ducks the first time out, they just couldn't find the back of the net. I expect a different result this time around. 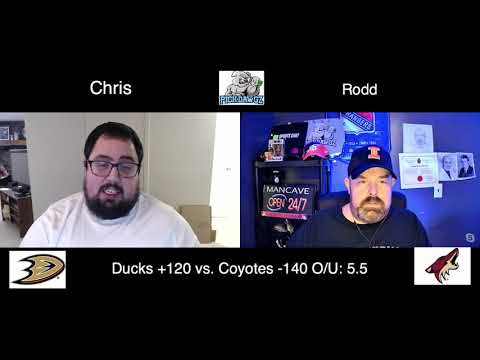