Where to Watch: TVA Stream live sports and exclusive originals on ESPN+. Sign up now!

The Ottawa Senators and Vancouver Canucks meet Wednesday in NHL action at the Rogers Arena.

The Ottawa Senators need a win here to snap a five-game losing streak. The Ottawa Senators are averaging 2.5 goals per game and are scoring on 12 percent of their power play opportunities. Chris Tierney leads Ottawa with three goals, Nikita Zaitsev has five assists and Brady Tkachuk has 24 shots on goal. Defensively, the Ottawa Senators are allowing 4.5 goals per game and are killing 73.1 percent of their opponents power plays. Matt Murray has allowed 21 goals on 152 shots faced and Marcus Hogberg has allowed five goals on 40 shots.

Both of these teams are on the struggle bus out of the gate, but it's fair to say the Vancouver Canucks are the better team here and have a clear edge on the offensive side. The Ottawa Senators are looking more and more like the team from last season and they've lost five of the last six games against the Canucks, which includes a 7-1 loss on Monday. The Senators are an awful team right now. I'll lay the reasonable price with the Canucks at home. 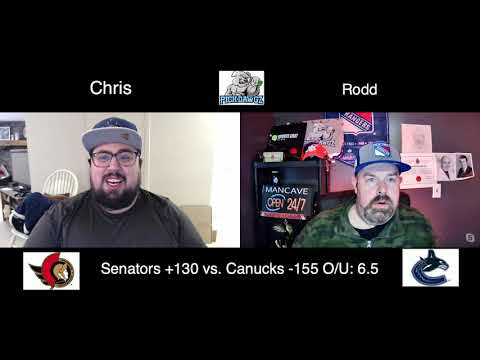