The Toronto Maple Leafs and the Calgary Flames meet in NHL action from the Scotiabank Saddledome on Sunday afternoon.

The Toronto Maple Leafs will be looking to add to their 4-2 mark on the year after a 4-2 win over Edmonton last time out. Mitch Marner leads the Leafs in scoring with 8 points coming on 4 goals and 4 assists while William Nylander and John Tavares each have 7 points with Nylander scoring a pair of goals while also logging 5 assists while Tavares has 4 goals and 3 assists for the Leafs this season. Auston Matthews also has 2 goals and 3 assists for his 5 points while Justin Hall has 4 assists this season. Frederik Andersen has seen the bulk of the work for Toronto with 5 starts, posting a 3-2 record with a 2.81 GAA and 14 goals allowed with 137 shots against.

The Calgary Flames will look to remain unbeaten in regulation after a 5-2 win over Vancouver last time out. Johnny Gaudreau, Sean Monahan and Elias Lindholm each have 4 points with Gaudreau and Lindholm logging 2 goals and 2 assists while Matthew Tkachuk and Rasmus Andersson each putting up 3 points with Tkachuk logging 2 goals and an assist while Andersson has a goal and 2 helpers. Jacob Markstrom’s started all 3 games for Calgary, going 2-1 with a 1.99 GAA and 6 goals allowed on 93 shots against.

I don’t know if it’s safe to back a side as Toronto’s got a solid goaltender in Freddie Andersen, but you never know when this guy is going to fall apart in the crease and give up four goals halfway through the second frame. On the other hand, I’m not sure how much I can trust Jacob Markstrom in goal for the Flames as both goalies have to deal with some offensive fireworks on the other side. Give me the over in this spot. 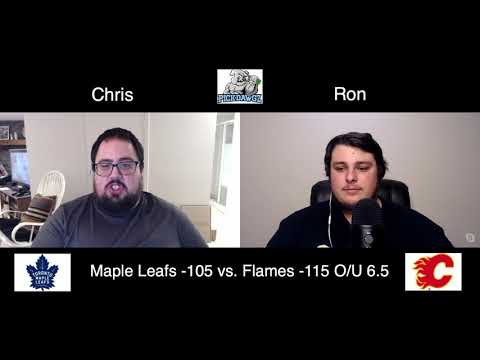