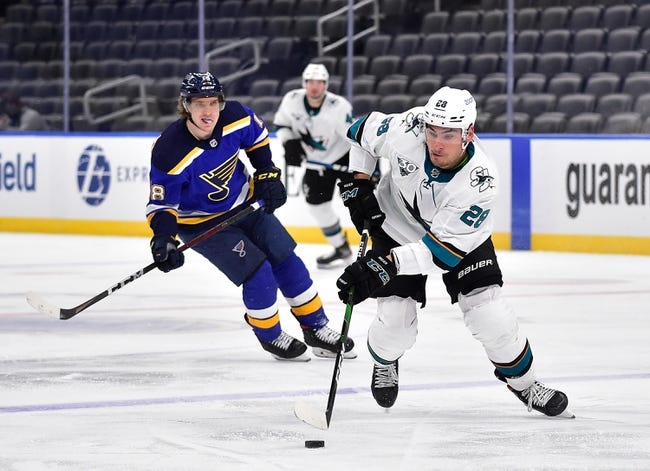 Where to Watch: FS-Midwest, NBCS-California Stream live sports and exclusive originals on ESPN+. Sign up now!

The San Jose Sharks and the St. Louis Blues meet in NHL action from the Enterprise Center on Wednesday night.

The San Jose Sharks will look to salvage the second half of the back-to-back after dropping the first matchup by a final score of 5-4 last time out. Kevin Labanc opened the scoring for San Jose just after the halfway point of the opening period and Logan Couture doubled the lead just 2:40 later but St. Louis would get on the board in the 2nd thanks to Justin Faulk’s goal at the 2:36 mark and Mike Hoffman would tie the game at two just 1:33 later. Brent Burns restored San Jose’s lead with just under eight minutes to go in the second, but Brayden Schenn would tie things at three just 2:11 later and Justin Faulk would give the Blues their first lead with one minute to go in the 2nd at 4-3. Logan Couture responded for the Sharks to make it 4-4 after the four minute mark of the 3rd, but Jordan Kyrou would put the Blues in front for good after the midway point of the 3rd as San Jose just didn’t have an answer over the final nine and a half minutes.

Jordan Binnington got the win in goal for St. Louis after stopping 22 of 26 shots faced in the win while Devan Dubnyk took the loss for the Sharks after giving up all 5 goals on 33 shots in the defeat.

If you told me at the beginning of the year that St. Louis and San Jose would both be having goaltending issues, I’d have thought you were crazy. However, the Sharks have issues with Martin Jones and Devan Dubnyk and the Blues have allowed 12 goals in their last two games. I just think until we see the defenses ratchet up the intensity, you’ve gotta go with the over in this spot.