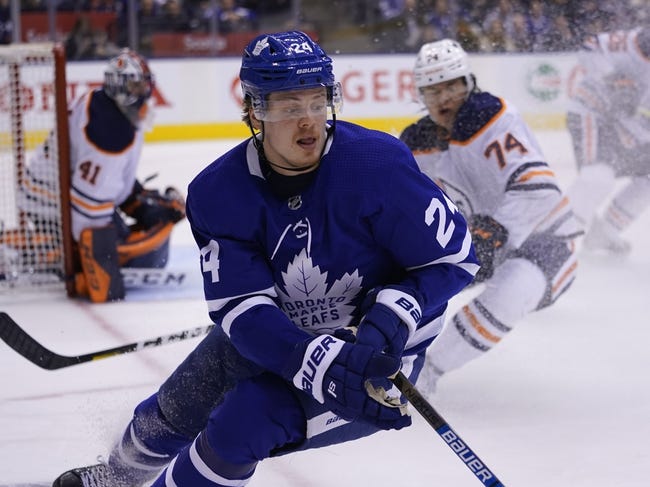 The Edmonton Oilers and the Toronto Maple Leafs meet in NHL action from Scotiabank Arena on Wednesday night.

The Edmonton Oilers will look to rebound after a 3-1 loss to the Montreal Canadiens in their last matchup. Montreal took the lead just before the midway point of the opening period and the lead would hold until the Habs doubled the advantage in the dying seconds of the second period. Montreal pushed it to 3-0 short-handed with just under eight minutes to go but Devin Shore would pot a consolation goal short-handed with just over two minutes to play, but that’s as close as the Oilers got as Montreal held on for the win and left Edmonton with nothing. Mikko Koskinen took the loss falling to 1-3 after allowing all 3 goals on 34 shots faced in the losing effort.

The Toronto Maple Leafs will look to add to their back-to-back wins after a 3-1 win over Winnipeg last time out. The game was scoreless through the opening 20 minutes before John Tavares broke the deadlock with a power play goal just over five minutes into the second period. Mitch Marner doubled the lead with just over a minute to go in the second  but Winnipeg would respond just 34 seconds later. Winnipeg outshot 12-6 in the 3rd, but the Leafs would ice the win with an empty-netter from Mitch Marner, his 2nd of the game to lock things up for Toronto and send Winnipeg packing. Frederik Andersen got the win after stopping 27 of 28 shots faced in the winning effort to improve to 2-1 on the year.

The plus money is tempting with the Oilers as they have two of the best players in the league Connor McDavid and Leon Draisaitl, but the fact here is that as good as those two are, it won’t fix the defensive issues that the Oilers have had to start the year. Toronto is loaded from top to bottom and we’re finally starting to see consistent performances from the Leafs worthy of a team of this caliber. I think Toronto is worth the juice here until we see signs of life from this Edmonton defense so give me the Leafs in this spot.